Their doors may have closed decades ago, but the inter-generational trauma caused by residential schools is still having an impact on Indigenous communities on Vancouver Island, and across the country, today.

“The health and social issues that we face in our community you can see them you can feel them,” said Tseshaht First Nation Chief Ken Watts.

In B.C. between 2013 and 2017, the rate of suicide among First Nations youth was four times higher than non-Indigenous youth and in Canada, although they make up just 4 per cent of the adult population, Indigenous people account for 30 per cent of all incarcerations.

“It’s people like me that created alcoholism and violence in our community and I’ll always have to carry that with me for the rest of my life,” he said.

After years of physical and sexual abuse at Kuper Island, Charlie says he became an alcoholic on the streets of Duncan by just 11-years-old.

Melven Jones also turned to drugs and alcohol to try to numb the trauma he experienced at the Nanaimo Indian hospital, saying it directly impacted his children.

Many survivors say they came home not just in pain but with no skills, no sense of value, and no connection.

“There were so many layers of disconnection created by these places, the stripping away of individual identity, of confidence, of connection to culture, all the things that are basic human rights were stripped away and when that happens to any individual who suffered any kind of trauma the effects are measurable,” said Alberni survivor Lou-Ann Neel.

After the remains of 215 children were discovered at the Kamloops residential school, survivors are hopeful the country is finally listening and they share their heartbreaking stories with one simple request.

“I want people to hear our truth and be compassionate about our experiences,” said day school survivor Angel Sampson.

“We’re here, we’re real, we’re not looking for handouts, we’re not trying to beg for anything, all we want is understanding and support for each and every one of our communities,” said Alberni survivor Kathy Horne.

“We’re going to only use this is a tool to be stronger to raise our children up in a good way, in a strong way to be who they are,” said Horne. “We want our children to thrive and [receive the] higher education which we were deprived of.”

They just ask the rest of the country to be there in support as they begin the long journey toward healing.

“The support needs to be there to lift that off our people so we can enjoy being citizens of this country,” said Neel.

This is part four of a series taking a closer look at the history of residential schools on Vancouver Island. 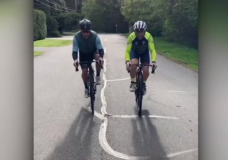