‘I was sleeping and he woke me up’: Sex abuse, violence and death at Kuper Island residential school

WARNING: This story contains graphic content related to violence and abuse, and may be disturbing to some readers.

Tony Charlie lives in Chemainus just across the water from the place of his nightmares.

Charlie is a survivor of Kuper Island residential school. Known as ‘Canada’s Alcatraz‘, Indigenous children were trapped there, surrounded by water, and forced to endure horrific physical and sexual abuse.

A total of 121 children died at the school on Penelakut Island. Charlie says the grounds are currently being scanned by a team of researchers and more remains have already been found.

“I know they will find some bodies but I know they found 28 unmarked graves so far,” he said.

Charlie was 15 when he first arrived at Kuper Island residential school, also called Kuper Island School. The sexual abuse at the hands of a priest started soon after.

Glen Doughty was eventually charged with sexually abusing more than a dozen boys and sentenced to three years in prison.

“I got raped so many times and every time I look up when I’m laying down on in bed I see that priest’s face smiling down at me and I feel angry,” he said.

Charlie says the abuse got so bad one day he saw other kids pushing a log down a hill and saw a way out.

“I threw myself in front of the log and it rolled over me and broke almost every bone in my body, and you can see the scars on my head and on my face,” he said.

Others didn’t make it — two sisters drowned trying to swim away from the island and another student died from suicide.

The school was run by the Catholic church and the bishop of the Victoria Diocese says all survivors should be heard and believed.

Gordon says he’s made many personal apologies for the incredible harms done and he urges anyone still defending the church or doubting survivors, to stop.

“Take off your rose-coloured glasses, get to know an Indigenous person and listen to the stories,” he said. “My word to those folks who want to live in a place of denial, we just have to acknowledge what’s good and name what’s wrong and deal with it up front and honestly.”

Gordon says the diocese has made three commitments to survivors: to help, if invited, with the search for more remains, to hand over any remaining documents, and to assist in providing mental health supports for survivors.

Tony Charlie has put his experiences at Kuper Island on paper with plans to publish his memoirs this fall.

“I will continue to share my story so people understand us,” he said.

“If they hear our story and try to understand it, you’re giving us the opportunity to find healing that’s helpful in our own ways,” said Eddy Charlie.

This is part two of a four-part series taking a closer look at the history of residential schools on Vancouver Island. 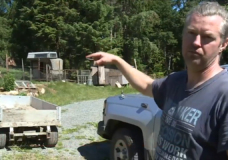 'I picked up a rock and threw it at it': Quadra Island man confronts grizzly bear on his farm