Posted: Jun. 10, 2021 5:49PM
File Photo
Iain Hay and Craig Gibson will be riding 559 km on Vancouver Island non-stop to help raise money for a friend who is in need of support.

Two central Vancouver Island men are embarking on an extreme ride of 559 kilometres this weekend in support of one of their extreme friends who needs some support.

The pair are planning to make the trek on their bicycles, in support of their Qualicum Beach friend, Al Wilson, who has paraplegia as a result of a mountain bike accident.

Since January, the duo — Iain Hay and Craig Gibson — has invested 400 hours, training for the most extreme bicycle ride of their lives.

“I thought what could we do that could affect some change and sort of message who Al is as a person?” said Hay, one of the riders.

This Friday at midnight, the pair plans to leave Port Hardy and cycle 559 kilometres non-stop, hoping to arrive in Victoria by evening.

“For me, it was about doing something special for Al because of who he has been pre-accident and post-accident. His willingness to jump in and help no matter what,” said Hay.

Prior to his mountain biking accident, Wilson was a sponsored Motocross rider and was known as ‘The People’s Champ’ and his racing bib number was 559.

“Motorbikes have been my passion my whole life. I’ve raced motorbikes and mountain bikes competed in a few cross-fit events and been active with a whole bunch of sports my whole life,” said Wilson.

The married father of two’s life took a dramatic turn this past July while mountain biking on Hornby Island suffering an accident that broke his back. Now, he’s adjusting to life in a wheelchair.

“The support I’ve been getting is just so incredible that I just want to take that and run with it and keep pushing forward and get stronger every day,” said Wilson.

The financial stress, however, has been real.

“This is for life and now I’m not working anymore so I’m basically retired at 44 so it’s been a huge strain. [I’m] just going to have to figure out how to adjust to a new job eventually,” said Wilson.

Wilson’s two friends are challenging others to do their own 559 physical challenge and are hoping, with a Gofundme, to raise $55,900 dollars for Wilson as well.

“It’s about spreading that hope too. It’s not just about the money. It’s about what people can do when they dig deep,” said Hay.

Something they say, regardless of his circumstances, Wilson has continued to do every day. 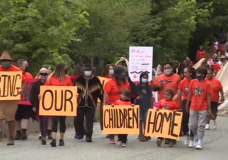