Wet’suwet’en demonstrators say they were targeted by White Supremacists

Posted: Feb. 29, 2020 6:22PM | Last Updated: Mar. 1, 2020 1:45PM
CHEK
WatchIndigenous demonstrators have dug in at the B.C. legislature, protesting the construction of a natural gas pipeline in northern B.C. But now, as Jasmine Bala tells us, they're also worried about their safety.

Indigenous demonstrators camped out on the steps of the B.C. Legislature say they are worried about their safety after being threatened by a white supremacist group.

“There have been threats from the Soldiers of Odin, a white supremacy group, that has threatened to come and tear down our encampment and to incite violence and, ultimately, to inspire fear in us,” said Kolin Sutherland-Wilson, a member of Indigenous Youth for Wet’suwet’en.

“We had several white supremacists approach members of our group,” said Blaney, “We had vehicles of them circle throughout the night, trying to surveil us, trying to intimidate us and ensure that our rest was, well, restless.”

The president of Vancouver Island’s chapter of the Soliders of Odin says none of their members were at the legislature buildings, and they did not intend on being there.

“We will leave policing the fake protesters up to the VPD,” said president Conrad Peach in a statement.

It’s the sixth day of Indigenous demonstrators occupying the steps of the provincial building to show solidarity with the Wet’suwet’en hereditary chiefs who oppose the construction of the natural gas pipeline in northern B.C., some of which runs through their territory.

However, even with the threats the Indigenous youth say they have been receiving, they say they aren’t going anywhere.

Supporters who were at the demonstration put up posts on social media, asking the community to come out to protect them.

Co-executive director of Lead Now, Sonia Theroux, said she was at home relaxing on her couch when she heard of the possible threat to the Indigenous demonstrators.

“When I heard word that the Soldiers of Odin were potentially circulating the legislature,” said Theroux, “I immediately knew no matter how tired I was, no matter how comfortable I was, I needed to come down.”

“I have no excuse to not show up when that level of threat is potentially happening 10 minutes from my home.”

Tensions have been mounting on both sides for days, with counter-protesters making their own moves.

On Feb. 10, a pick-up truck drove through a Highway 19 blockade near Courtenay — twice in one day.

That same day, five people wearing bandannas came out of the nearby woods and tore down the same barricade the truck had driven through.

“I’m just a citizen…this is unfair, I need to get across this bridge”. More on this double-bridge protest playing out in Victoria on @CHEK_News at 6 #YYJ pic.twitter.com/L752x7gEHB

These confrontations have been playing out across the country, as Wet’suwet’en supporters make their demands known through occupations and blockades.

Canadians United Against Hate said in a press release they’ve seen an uptick in acts of hate against Indigenous protesters. They said the threats to various Indigenous groups across the country have included “threats to shoot and bomb Indigenous gatherings and target individuals according to media reports and posts shared on social media.” 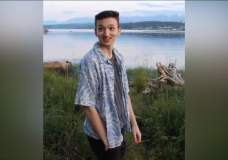 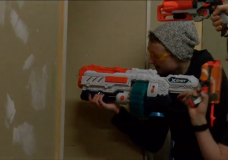