Protesters started moving along Wharf Street toward the Johnson Street Bridge just before 4:30 p.m. on Feb. 10. When protesters arrived on the bridge, vehicle traffic was blocked. Pedestrians and bicycles were able to cross on the walkways. The bike lanes on the bridge deck were closed. 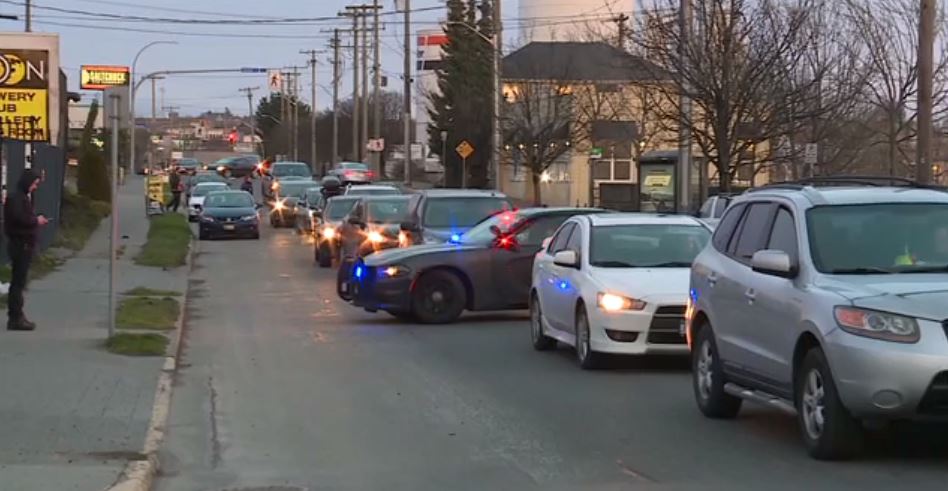 Some of the traffic backed up due to the protest on the Bay Street bridge on Feb. 10, 2020. 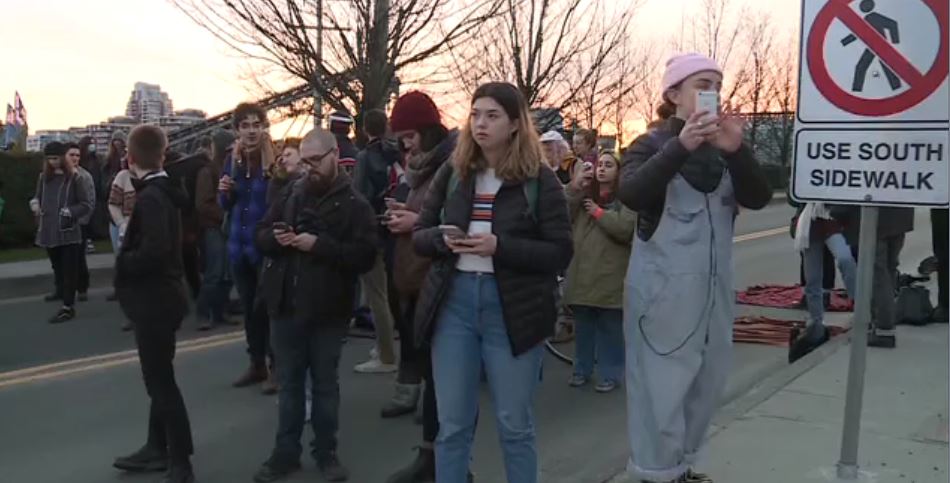 Protesters are moving towards the Johnson Street Bridge. #yyjtraffic will be disrupted on Wharf Street. Please avoid the area. #yyj

Your patience is appreciated. We're doing what we can to keep everyone safe. #yyjtraffic #yyj

Elsewhere in Victoria, protesters, who refer to themselves as land defenders, have been at the B.C. legislature since last week. A rally is scheduled outside the legislature tomorrow, ahead of the Throne Speech.

There are also demonstrators blocking Highway 19 near exit 117, close to Courtenay. The demonstrators went to the location at 12:30 a.m. Monday. Tensions have been high at the site with one man coming out to argue against the protesters. A pickup truck also broke through a wooden barricade while driving the wrong way on the highway. The driver crossed the grass divider before driving away south.

The protesters demonstrating in solidarity with opponents of the B.C. pipeline project.

Jen Wickham, a spokeswoman for one of the five clans that make up the Wet’suwet’en Nation, said its members led by hereditary chiefs are defending their territory from construction of the Coastal GasLink pipeline.

“We are the rightful title owners of our territory and we will continue to assert our sovereignty,” she said. “It’s not a question of protesting. It’s a question of their homes. They’re defending their homes.”

The RCMP began enforcing a court injunction last week against people camped near a pipeline work site in Houston.

The conflict has prompted demonstrations spanning from the steps of the B.C. legislature to a Via Rail line running between Montreal and Toronto. Wickham said she believes there is a growing understanding of First Nations rights among non-Indigenous Canadians.

“I think that people are starting to wake up to the fact that we have the right to our territory,” she said.

All 20 elected band councils along the pipeline route, including the Wet’suwet’en council, have signed benefits agreements with Coastal GasLink. However, the Wet’suwet’en hereditary chiefs say the council established by the Indian Act only has authority over reserve lands.

The RCMP said Sunday 14 arrested people were either transported or set to be transported to appear in B.C. Supreme Court on Monday. Six other people were released without charges and one was released on conditions with a future court date.

“The senior commander continues to update the hereditary chiefs through the Office of the Wet’suwet’en and to offer facilitation of their access to the area and engagement with persons who remain there,” the Mounties said.

Premier John Horgan has said the pipeline, which is part of a $40 billion liquefied natural gas export terminal being built by LNG Canada, is of vital economic and social importance to northern B.C. He said the courts have decided the pipeline can proceed and the rule of law must prevail.

On the B.C. legislature steps, protester Kolin Sutherland-Wilson said he feels a responsibility to stand up for Wet’suwet’en members.

“In this day and age, it is immoral, it is unjust and it is inhumane for Canada to continue to criminalize and vilify Indigenous law,” he said.

Protesters began disruptions at ports in Vancouver and nearby Delta on Friday. Police in Delta police said emergency health services were called for one protester out of an abundance of caution when arrests were made on Monday.

“Everyone involved was treated respectfully and with dignity,” said Cris Leykauf, a Delta police spokeswoman.

A spokeswoman for the protesters said they planned to discuss further actions.

“The purpose of this is to express solidarity and to make an economic impact so that the government of Canada knows that business as usual is not going to continue while Indigenous people and the Wet’suwet’en Nation is under attack,” said Natalie Knight.

Knight also said she has seen a shift in public opinion. Protesters explained the issue to those affected by the Vancouver port blockade and some responded with support for the Wet’suwet’en, she said.

She said the situation reminds her of pivotal moments in history, such as the 1990 Oka crisis, a 78-day standoff involving a group of Mohawk people that led to the federal government taking a closer look at its relationship with Indigenous Peoples.

In the years that followed, residential schools were closed and the Truth and Reconciliation Commission was launched, Knight said.

“The ripple effects of these kinds of actions for Indigenous sovereignty are much bigger than we can predict or see in this current moment.”

With files from Dirk Meissner in Victoria, Stephanie Levitz in Ottawa and Holly McKenzie-Sutter in St. John’s, N.L., The Canadian Press 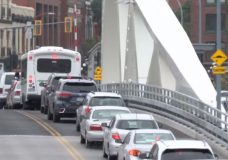