The official search for 20-year-old Miles Meester who went missing on Feb. 6 has long ended but family and friends say they’ll keep looking until they get some answers.

“It’s so hard, like panicked grief and you know but we’re sticking together,” said Meester’s aunt Jade Jordan.

It was on the evening of the sixth when Miles was last seen in the area of Manson’s Landing close to where he lives.

“But it was during the day that we started getting worried about him because he was starting to have some pretty serious mental health problems that came on pretty quickly,” added Jordan.

It was during that confusion when he left the house and he hasn’t been seen or heard from since.

“It’s intense, it’s like you have no idea where he is,” said his cousin Aspen King. “There’s a point where you just didn’t know where to look anymore.”

B.C. Ferries video shows no sign of Meester leaving Cortes Island and since his disappearance, various articles of his clothing have been found allowing them to narrow down the search area.

However, the official search has ended leaving family and friends to look through the woods themselves.

“I am extremely worried about him. I’m hoping he’s going to be found soon with all these extra teams we have coming in,” said King.

A specialized team of searchers with dogs from Edmonton has already been to Cortes Island and will be returning next weekend.

There is a Gofundme page to help with the search.

Anyone who thinks they have seen Miles Meester is asked to call the police.

'It's not just a song and dance:' father and daughter connect with roots for Nisga'a Nation's new year 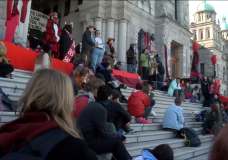 Wet'suwet'en demonstrators say they were targeted by White Supremacists