Tougher COVID-19 restrictions in B.C., including travel, still ‘on the table’: Horgan 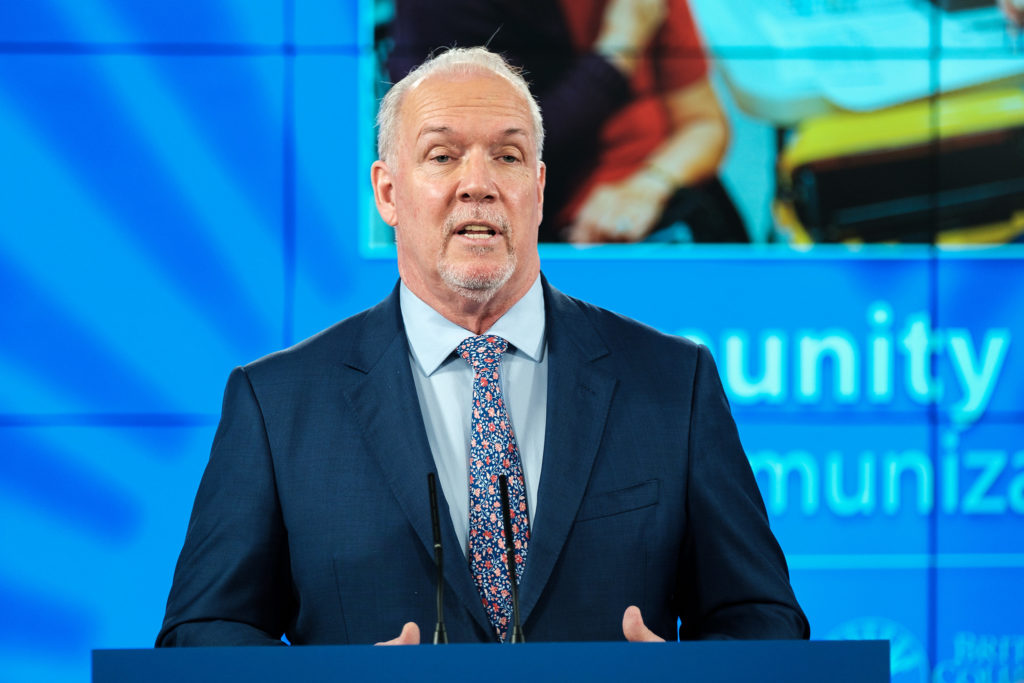 VICTORIA – Further COVID-19 restrictions may be on the way for British Columbia, with the premier suggesting changes could come as early as Thursday.

Premier John Horgan said Tuesday he expected the provincial cabinet will consider travel restrictions and those talks will also likely examine the status of visitor bookings for hotels, bed and breakfasts and campsites.

The premier said provincial health officer Dr. Bonnie Henry will provide any update of possible new restrictions Thursday during a briefing where the province’s latest COVID-19 modelling data will be presented.

“We are in a new phase of the COVID crisis and our approach has been always to be nimble, to be focused on what we can do to keep people safe,” Horgan said at a news conference where he announced youth job supports.

B.C. imposed restrictions last month that shut down the resort community of Whistler and halted indoor dining at restaurants and pubs across the province in a three-week circuit breaker to slow the spread of COVID-19 variants of concern.

Horgan said the B.C. cabinet meets Wednesday and taking more steps to fight the ongoing COVID-19 pandemic is bound to be discussed.

“We’ve not taken anything off the table, but practicality is first and foremost in our mind,” said Horgan. “We will use the tools that are available to us if we believe they are effective, but deployment of those tools is a challenge. We haven’t taken travel restrictions off the board, quite frankly.”

He said case counts in Quebec and Ontario are continuing to rise despite widespread closures in Ontario and a curfew in Quebec.

Horgan said he was concerned to hear that more than 100 people who recently arrived in B.C. have refused to adhere to federal quarantine rules.

He said he and Alberta Premier Jason Kenney spoke earlier this week about issues regarding travel between the provinces and the potential impacts on COVID-19 case counts.

“Among those were the concerns we both share, mutually, about people that come back and forth between Alberta and B.C. whether it be on essential travel or non-essential travel and the consequences that’s having on case counts in our respective jurisdictions,” Horgan said.

Last summer, there were reports ranging from verbal arguments to vehicle vandalism against people in Sicamous, Revelstoke and Trail with vehicles with Alberta licence plates.

But Horgan suggested Tuesday the issue could be revisited.

“We’re listening to advice from public health officials. We’re taking that advice,” he said. “We’re following the science and if Dr. Henry believes that there’s an opportunity for us to use some form of border restrictions, we’ll look at that.”

Henry said Monday people should stay in “their immediate neighbourhood as much as possible.”

Horgan said he is troubled by the recent COVID-19 case counts in B.C. and is looking to Thursday’s release of information for a better sense of where the province stands.

B.C. reported 873 new cases on Tuesday and two more deaths. There are 377 people in hospital and 116 of those are in intensive care units.

More than 1.14 million doses of the three vaccines have been administered.

On top of the age-based program, and giving Oxford-AstraZeneca shots to those aged 55 to 65, a parallel worker vaccination program is now focused on hitting high-risk workers in COVID-19 hot spots.

“We are adapting our vaccine delivery in step with our supply and will continue to do that moving forward,” said Henry and Health Minister Adrian Dix in a joint statement. “If needed, we will pivot, pause or shift our delivery to maximize protection to as many people as possible.”

This report by The Canadian Press was first published April 13, 2021.

Surrey woman who died after shooting was an 'unintended victim': IHIT