Victoria police said people were pushed and shoved during the Wet’suwet’en supporter protest at the BC legislature Tuesday.

Police said Tuesday evening they are investigating reports of B.C. legislature staff and others being assaulted and injured during the protest.

“Investigators are asking witnesses and victims to contact them after receiving reports that people were assaulted and injured during the protests at the B.C. Legislature today,” police said in a statement.

“Officers are aware of reports in local media and on social media of people being assaulted and injured during the protests. We are actively investigating these reports and encourage those with information to come forward.”

Victoria police said they are continuing the monitor the situation at the B.C. legislature. They confirmed officers were called to the building earlier in the day due to a large number of protesters not blocking entry to the building.

“We’ve had many questions about why we have not arrested protesters. Our primary duty is to keep the public safe,” Victoria police wrote in a statement.

“Today has seen Members of the Legislative Assembly, reporters, and staff, blocked from entering the building. People have been pushed and shoved. This is unacceptable. Our officers have worked to ensure safe entry and exit to the legislature while balancing the right to peaceful protest. Peaceful protest does not involve pushing and shoving, nor obstructing people from their places of work.”

Officers were called to the Legislative Assembly Building earlier today in response to a large number of protesters blocking entry to the building.

We’ve had many questions about why we have not arrested protesters. Our primary duty is to keep the public safe. #yyj #F206406

Today has seen Members of the Legislative Assembly, reporters, & staff, blocked from entering the building. People have been pushed & shoved. This is unacceptable. #F206406

Our officers have worked to ensure safe entry & exit to the Legislature while balancing the right to peaceful protest. Peaceful protest does not involve pushing & shoving, nor obstructing people from their places of work. #F206406

Officers continue to monitor the situation at the Legislature. We will keep everyone informed about anticipated #yyjtraffic disruptions while we work to keep everyone safe. #F206406

During the speech, Wet’suwet’en supporters stopped blocking the doors B.C. legislature except for the front door as the spring session started.

One female government staffer told CHEK she suffered a nosebleed after a protester elbowed her. Another woman reported being spit on.

Spoken with a number of staffers who were assaulted. One female government staffer suffered a nosebleed after a protester elbowed her, another protester tried to physically stop a staffer, and one woman spit on. @CHEK_News https://t.co/6142xWTomb

As a result of the protests, the Prorogation Ceremony had been postponed until 1 p.m.

The Speaker has confirmed all invited guests for the opening of the spring session will not be allowed into the building due to the protests. The guests usually number in the hundreds.

Due to the ongoing situation on the Legislative Precinct, the Prorogation Ceremony has been postponed until 1pm. The Throne Speech is still anticipated to take place at 2pm as planned. #BCLeg #BCpoli

Other scheduled events were cancelled at the legislature, including a press conference scheduled to take place after the throne speech.

Victoria police had set up a path to the legislature as demonstrators were holding a sacred ceremony. Before the police escorts, MLAs, journalists and employees were blocked from getting into the building.

One supporter was telling the crowd to not let police touch them and to call out if police make any sort of contact.

Our officers are attending the Legislature as protesters are blocking staff entrances. We are working to support Legislature Assembly Protective Services. #F206406 #yyj

Demonstrators are holding a sacred ceremony right where police set up a path. One supporter telling the crowd to not let police touch them and to call out if police make any sort of contact. @CHEK_News #bcpoli #ShutCanadaDown #yyj pic.twitter.com/F3uCJU5cuG

MLAs, journalists and employees attempting to gain access into the building are being blocked by Wet’suwet’en supporters.

.@timescolonist reporter Les Leyne tries to get in BC Legislature but is blocked by protesters. @CHEK_News pic.twitter.com/rmDkz7BGPZ

Demonstrators were also at the exit of the Helijet terminal at Dallas Road Tuesday morning, hoping to get the attention of MLAs arriving in town. They left around 8:30 a.m.

Victoria police say they responded to the terminal and traffic was impacted.

Minister of Public Safety and Solicitor General Mike Farnworth said people have the right to a peaceful protest but “there is absolutely no place for violence whatsoever and if individuals are found to have engaged in violence or to have hurt people, they will face the consequence of the law.”

On Tuesday afternoon, Premier John Horgan issued a statement saying British Columbians have the right to a peaceful protest and the government supports people exercising their democratic rights “within the law.”

Horgan said the NDP government, represented Scott Fraser, Minister of Indigenous Relations and Reconciliation, met on an “urgent basis” for two days in February in an effort to find a peaceful resolution to the impasse regarding the Coastal GasLink project.

However, those talks were unsuccessful.

“My government continues to be available to engage with the Wet’suwet’en Hereditary Chiefs through the Wiggus Table discussions. We are also engaged in ongoing reconciliation discussions, which are focused on rights, title, self-government and self-determination. Those channels of communication remain open,” Horgan said.

“These events show us why meaningful reconciliation with Indigenous peoples is our shared responsibility and is critical to our province and our country. This was a commitment my government made in good faith two and a half years ago, and as Premier, I am determined to see it through. The Declaration on the Rights of Indigenous Peoples Act passed the legislature with a unanimous vote. Our work here has not ended – it has just begun. Reconciliation is hard work. It does not begin or end with a single decision, event or moment. No single one of us decides what reconciliation can or should look like. It is a shared journey we are on together. We know that this work isn’t easy. If we’re going to achieve it, we have to stay committed to this process, keep engaging with one another and find common ground. As we move towards a collaborative action plan flowing from the unanimous passage of the Declaration on the Rights of Indigenous Peoples Act, I am confident we will get there together.”

Victoria councillors Ben Isitt and Sharmarke Dubow were seen at the protest. Victoria Mayor Lisa Helps said she hopes that the province doesn’t see the actions of individual councillors as reflecting on the council or the city as a whole.

“Councillors are free to do what they want in their spare time but the relationship with the province to me is really important and so hopefully the individual councillors actions aren’t seen to reflect on council as a whole,” Helps said.

Helps called the actions across Canada a complicated situation.

All the efforts are in support of Wet’suwet’en hereditary chiefs who are opposing the Coastal Gaslink pipeline.

All 20 elected band councils along the pipeline route, including the Wet’suwet’en council, have signed benefits agreements with Coastal GasLink. However, the Wet’suwet’en hereditary chiefs say the council established by the Indian Act only has authority over reserve lands.

Horgan has said the pipeline is of vital economic and social importance to northern B.C. He said the courts have decided the pipeline can proceed and the rule of law must prevail.

On Monday both the Bay and Johnson Street Bridges were blocked in the afternoon, and Highway 19 near Courtenay was also barricaded.

READ MORE: Bay Street and Johnson Street bridges reopen in Victoria after being shut down by Wet’suwet’en supporters

These resulted in some clashes between drivers and protesters.

The B.C. government is slated to kick off the spring session with the throne speech. They are expected to highlight their achievements over the last three years and layout their future goals. 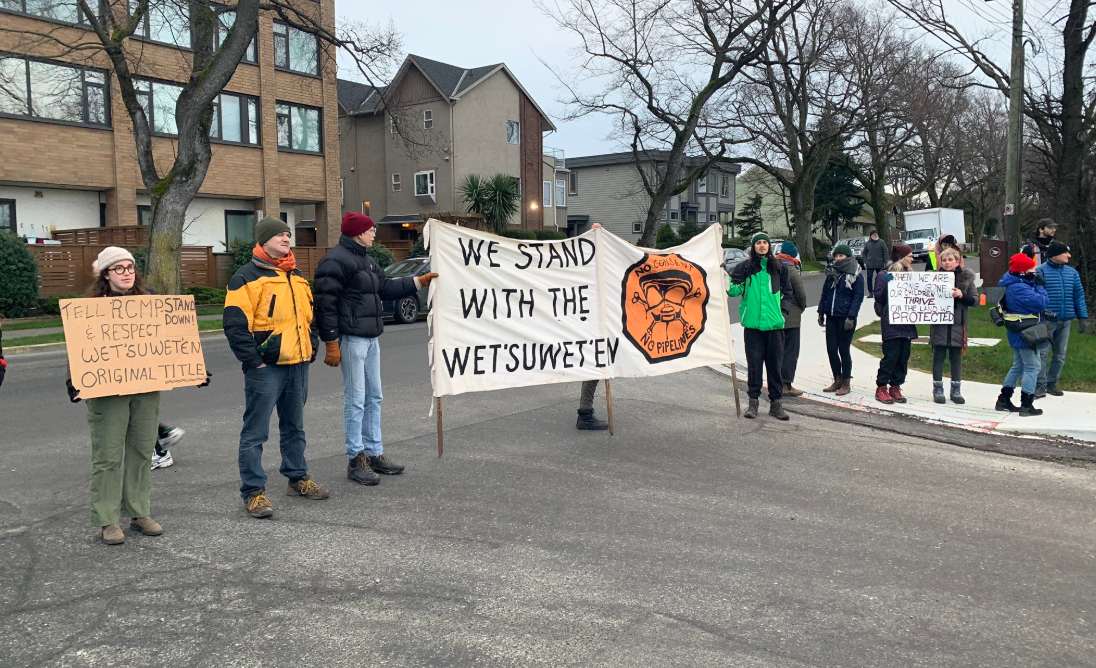 Wet’suwet’en protestors outside Victoria’s Helijet terminal. Several MLAs are expected to arrive within the hour for the throne speech at the BC Legislature. 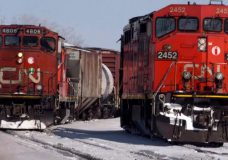 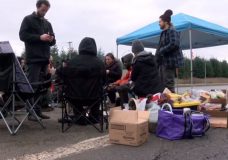