The demonstrators that shut down the Inland Island Highway for much of the day Monday say they only ended the protest because they were threatened.

One of the demonstrators says the threats escalated throughout the day and on Monday night, they were so concerned they would be harmed. So they decided to pack up early and go home.

“These people were clearly intent on harm and these folks kept closing in and got more aggressive with the police, to the point that the police themselves. We only had three officers there,” said Deraek Menard, a demonstrator with The Land Defenders.

But things quickly became tense. Early on a truck drove through the barricade and verbal threats increased as the day went on. At one point, five people suddenly arrived and tore down their barricade.

At 9:45 p.m. Monday night police told the demonstrators the situation was getting dangerous.

“We can not protect you. It is time to shut it down Deraek. We do not have the resources to ensure your safety and the situation is escalating,” Menard says they told him.

So the protesters went home

“The Comox Valley RCMP reminds residents that we are enforcing the criminal code and have/will investigate any and all complaints regarding criminal activity associated with the
protest.”

The demonstrators say they are disappointed to have ended their protest early and they wonder what was motivating such a negative backlash.

“There is no reasonable defence of why they would want to take these aggressive actions to shut down a solidarity action with violations of First Nations rights,” said Menard.

They say there will be other actions until the government backs down and properly negotiates with the Wet’suwet’un.

All 20 elected band councils along the northern B.C. pipeline route, including the Wet’suwet’en council, have signed benefits agreements with Coastal GasLink. However, the Wet’suwet’en hereditary chiefs say the council established by the Indian Act only has authority over reserve lands. 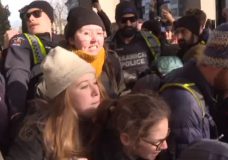 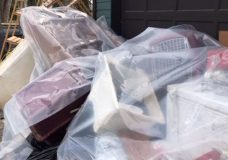