‘It came out of nowhere’: Man stabbed in Centennial Square told he may never work again

Posted: Sep. 11, 2020 6:07PM
CHEK
WatchA GoFundMe page is running for a Victoria man who was stabbed in Centennial Square last month, after he and his wife can no longer work.

Steven Mackean now struggles to pour himself a drink from the fridge.

It’s one of the many simple tasks that now seems Herculean ever since he was severely injured on Aug. 22 when walking downtown with a friend.

“We were going from one bar to the next. We were both new to the area,” said Mackean, who just moved to Victoria a month ago. “We obviously went the wrong way and ended up in that Centennial Square.”

While walking through, he was attacked.

“It was out of nowhere. The guy pulled out a knife or a box cutter and went for my face or throat area, and I got my hands up and it cut straight across my wrist,” said Mackean recalling the night he and his friend were surrounded by a group of strangers.

With three slashed arteries and over 10 severed tendons, doctors told Mackean, who is a roofer, he may never work again.

“There could be too much nerve damage and numbness,” said Mackean, who recently signed a lease for a new home for him and his family.

“This happened a couple of days before we moved into this place, and we already had a damage deposit in, the lease was already signed, and with the car payments, it’s stressful.”

His wife Katrina Passley is also unable to work, taking on the role of his caregiver and mom to their two children.

“It’s hard to tell my kids when they jump on the couch and cuddle up to him, tell them that they cant,” said Passley, who recently went on an eight-week leave from work to help take care of her husband.

A GoFundMe account has been set up to help with finances, but now the family says Victoria seems less safe.

“It’s definitely changed my view of downtown,” said Passley. “I won’t stop there, if I have to take him to the hospital or anything, I won’t stop to Tim Hortons to get a coffee.”

She isn’t the only one with new fears of the downtown core.

“We have heard some feedback from businesses that either are closing because of all of these things, but the whole issue of safety being the final straw, or businesses are thinking of moving to another region,” said Jeff Bray, executive director of the Downtown Victoria Business Association (DVBA).

With Victoria City Council’s latest decision to allow campers back in Centennial Square, shoppers and workers in the downtown core are worried, and so is the DVBA.

“We’re very disappointed with that decision. We were actually shocked by it,” said Bray. “Our businesses are just hanging on, and are really feeling that even a handful of campers sends the wrong signal about our downtown core.” 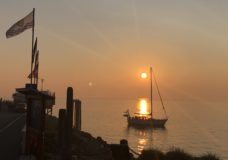 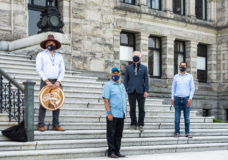