A move to Vancouver Island went a little awry last night near Comox as a company was barging a house to the Point Holmes boat ramp when a dozer tugboat capsized.

Cathy Christensen was among those watching as those onshore tried to help a small and large tug bring the barge to the boat ramp.

“He threw them a rope and he was helping them to guide them over but the wind was pretty strong and it kept pushing them over,” said Christensen.

Then the plans took a turn for the worse.

Christensen was taking this video moments before the smaller 20-foot one-person tugboat flipped beside the barge.

“I looked over at him and he’s climbing on top of the boat. He flipped right over. It was fast. In the blink of an eye.”

The Coast Guard says the much larger tug was able to maneuver the barge with the submerged small tug attached to it into Comox Harbour.

“The barge went across and into the harbour. I guess they got a crane there that lifted it out right away,” said Christensen.

The Coast Guard says there were no observations of any pollution.

Nickel Brothers, the company in charge of moving the house, did not return calls before our deadline for this story but their equipment is still onshore waiting for the next attempt.

“It was interesting. I’m kind of hoping they try tonight,” said Christensen.

An area resident says a company employee told her the large home is going to Kye Bay Road, a short distance from the Point Holmes boat ramp.

There’s no word on when they may now try to move the house onshore. 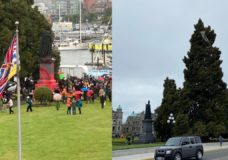 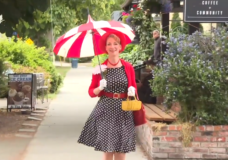