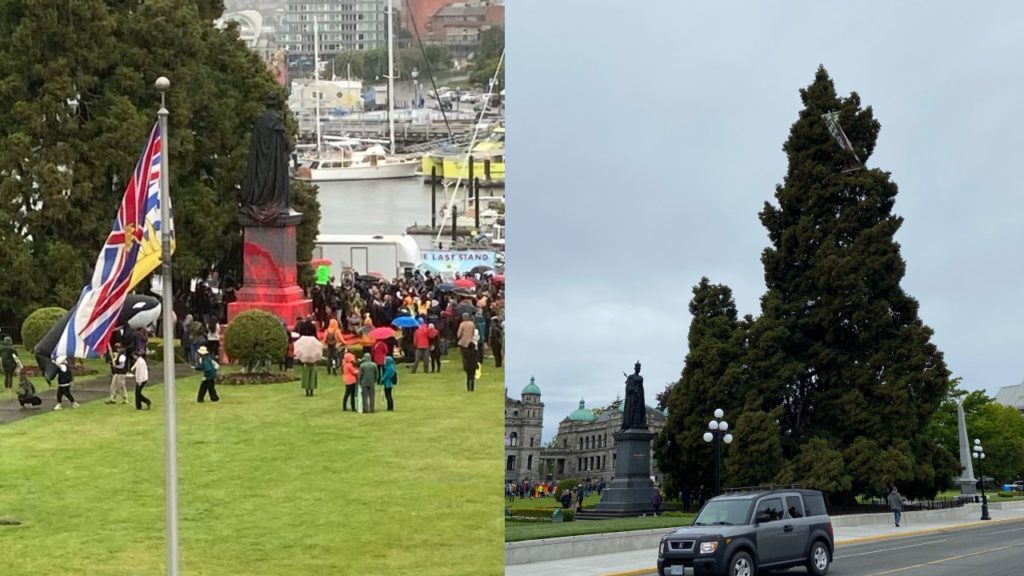 It has been an eventful day on the front lawn of the B.C. Legislature as a statue of Queen Victoria was covered in red paint and a demonstrator climbed a tree amid an old-growth logging protest.

In the latest in a series of demonstrations protesting old-growth logging in British Columbia, one activist opted to climb a tree on the grounds, hanging a banner from the branches.

Additionally, the statue of Queen Victoria was doused in red paint amid a swarm of demonstrators.

Investigators with the Victoria Police Department are currently seeking information and are asking for witnesses to come forward surrounding the vandalism of the statue.

“Safe, peaceful and lawful protest is permitted under the Canadian Charter of Rights and Freedoms. Vandalism is not,” reads a statement from Victoria Police on the subject.

The damage to the statue is being assessed and the incident remains under investigation.

Earlier this week, the Province announced that it would honour the wishes of the Huu-ay-aht, Ditidaht and Pacheedaht hereditary and elected chiefs, who formally announced that they signed a declaration to take back power over their traditional territories after over 150 years of decision-making by others regarding their land, water and people. As part of the declaration, the three First Nations told the B.C. government to defer all old-growth logging on their territories for two years.

The B.C. government announced that it would respect the First Nations’ request and halt logging in the Fairy Creek watershed, however, protests have continued as demonstrators say a ban on all old-growth logging should be imposed in perpetuity.

This is also not the first time this year that a statue of The Queen has been vandalized in Victoria. The head from a bust statue of Queen Elizabeth II, located in Beacon Hill Park, went missing back in February. 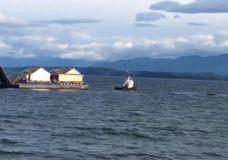