Following multiple demonstrations from Save Old Growth protestors, including various highway blockades, an organization is considering filing a class-action lawsuit against the environmental group.

“It’s time for citizens to be able to take some action,” said Tamara Meggitt, an organizer for Clear the Road.

The Courtenay woman says her family has been involved in the forestry industry for years and says they’ve been impacted negatively by the demonstrations.

Meggitt says she reached her tipping when she saw a tweet of a parent who said they were blocked by protestors while trying to get their child to the hospital for cancer treatment in Victoria.

“When you start impeding people’s lives when you start blockading roads and infrastructure, it becomes a whole new ball game,” said Meggitt.

She calls the protests unlawful. In a press release, Clear The Road cites section 423 (1) (g) of the Criminal Code which makes blocking or obstructing a highway punishable by up to five years in prison.

Following the Freedom Convoy protests in Ottawa, a proposed class-action lawsuit was filed against the convoy, which is now being used by Clear The Road as precedent for their potential lawsuit.

“We watched what happened in another province and how citizens were able to take action,” said Meggitt.

Clear The Road is collaborating with Resource Works — a non-profit research group — to gather evidence and build its case.

“We have almost 1,000 individuals that signed a petition, who aren’t happy with the state of affairs, who don’t know if they’ll be able to get to work,” said Stewart Muir, Executive Director of Resource Works.

No legal aid has been retained, but Meggitt is asking those who have been disrupted by the blockade to email evidence to [email protected]. That includes lost wages from missed shifts, missed appointments, and spoiled merchandise.

Save Old Growth says that they understand the public’s frustrations.

On Thursday, two protestors with Save Old Growth glued themselves to the goalposts at BC Place Stadium during the Canada-Curacao soccer game.

“We will continue disruptions until our demands is met by the government,” said Papp.

The group did not go into detail as to what those disruptions would look like, only adding that it would target “critical infrastructure in B.C.” 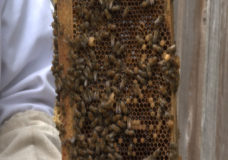