August 16, 2021 updated
CHEK
WatchFrustrations are rising off Tofino after a confrontation between the DFO and Ahousaht fisherman who say they were denied their rights to sell salmon caught in their own territory.

When Harvey Robinson returned to Tofino with a haul of salmon caught under the authority of Ahousaht’s hereditary chiefs on Saturday, he was beaming with pride.

Thanks to a recent court ruling in April that affirmed five Nuu-chah-nulth First Nations’ right to fish and sell their catch.

But within moments of docking his boat Saturday, a federal fishery officer informed him he could only sell 10 of the 250 salmon he’d caught.

“I talked to my supervisor, my supervisor’s supervisor. What they say is because you headed out on the sixth, 10 are allowed to be sold,” said the fishery officer in cell phone video, captured of the confrontation.

“10?” fishermen can be heard responding.

The confrontation happened despite the B.C. Court of Appeal ruling that said the Department of Fisheries and Oceans could not impose limits on First Nations commercial rights.

“But does that mean anything to them? Does that translate into some kind of reconciliation? Not to the government,” said Cliff Atleo, lead negotiator for the Ahousaht hereditary chiefs.

Atleo was a chief negotiator in the court battle for his community’s commercial fishing rights. He said Saturday’s confrontation infuriated him, and that more boats will be taking their fight to the water in the days ahead.

“We’ll have other fishers going out and they’ll be coming in with their loads and we’ll be confronting DFO every step of the way,” said Atleo.

Just as a crowd of supporters did around Robinson in Tofino, on Saturday.

“If you are going to take any action, take it now,” an unidentified fisherman could be heard on video telling the fishery officer.

By the time the confrontation ended, and the fisheries officer walked away, Robinson was still trying to find a buyer for his fish.

Atleo also says buyers have been threatened with fines if they buy the salmon in question. 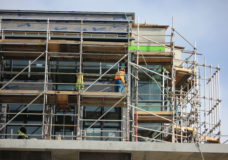