With 200 tents now set up at Victoria’s Topaz Park, the temporary homeless camp is at capacity. Fortunately services like hand washing, washrooms and showers are finally up and running.

“We’re doing the best we can with what we have under the circumstances every day,” said Kelly Roth, Executive Director of the Greater Victoria Coalition to End Homelessness.

Some campers have been moved into motel rooms⁠—195 rooms have been secured so far, 160 by BC Housing and 35 by the City of Victoria.

But there are still more than 100 tents crowded along the 900-block of Pandora Avenue and countless others scattered around the city, including a growing number at Beacon Hill Park.

“I’m glad the government has opened Topaz and they’re putting money into it to make it work but I’m just disappointed more isn’t being done at an accelerated rate,” said Our Place Society Director of Communications Grant McKenzie.

Victoria Mayor Lisa Helps and two councillors, Jeremy Loveday and Sarah Potts, are pushing even harder. They are putting forward a joint motion to city council Thursday urging the province to use its emergency powers to secure more motel rooms, whether they’re offered up voluntarily or not.

“Rather than negotiating on a case by case basis, which is what BC Housing has been doing to date, it would give the province the power to say such and such a building is empty and we are going to take it over for the purposes of providing shelter and indoor accommodation for vulnerable residents,” Helps said.

And if the province doesn’t want to, Helps is asking them to give the city the authority to do it because she says motel operators aren’t offering to house people with severe mental health and addictions issues on their own, and hundreds more rooms are needed now.

“The people who are most vulnerable are being left out on the street,” Helps said.

Those on the front lines agree more provincial help is needed and quickly but they admit it won’t be as simple as just finding rooms and moving people in.

“The big challenge, of course, will be staffing those people of course the COVID pandemic is so different than any other crisis that we’ve faced and getting the staff in there is obviously a challenge,” said McKenzie.

BC Housing says it’s currently working on securing a site for an emergency response centre that will provide more spaces for vulnerable people, and is also in contract negotiations with several hotels. Those contracts are expected to be finalized within the next two weeks. 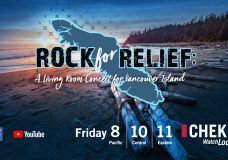 Rock for Relief on CHEK: Where are your dollars going?