April 9, 2020 updated
Chek
WatchThere are more homeless campers on Pandora Avenue and now one of the facilities they were supposed to move to has been taken off the table. April Lawrence reports.

Valentina Lawrence has lived on Pandora Avenue for six years but she says a growing number of homeless campers outside her building has her on edge.

“There’s feces on the sidewalk, garbage, needles, you know everything that comes with this kind of activity,” she said.

“It’s quite frankly very scary, it’s scary to walk to ride to be outside in our neighbourhood,” she said.

Lawrence says the tents started popping up a few weeks ago and there are now about 50 people living on her block, with hundreds more in the 900-block of Pandora Ave.

“No one is moving from this area, although we’ve been told they’ll be moved they also have said they can’t force them to move,” she said.

But the list of accommodation options is getting shorter. BC Housing announced Wednesday that Royal Athletic Park, where the most vulnerable were going to be housed, has been taken off the table after Island Health deeming it unsuitable.

Instead the province is keeping 25 winter shelter beds at the Victoria Native Friendship Centre open until the end of June and is working to secure more motel rooms.

So far BC Housing has secured 160 rooms while the City of Victoria has secured 35, for a total of 195 rooms. According to Victoria’s mayor at last count 102 vulnerable people had moved in.

About half of those came from the temporary shelter at Topaz Park.

“I just want to say this is such a different tent city than ever before because this is organized by all the professionals and the homeless are here and they know we’re trying to protect them,” said Dandelion Society Executive Director Reverend Allen Tysick.

There are about 80 people now camping at Topaz but Tysick says few if any came from the Pandora Avenue camp.

Valentina Lawrence is growing desperate for something to be done.

“We’ve elected these officials and I do believe it’s their job and I think it’s their job to keep us safe and they’re simply not doing it,” she said. 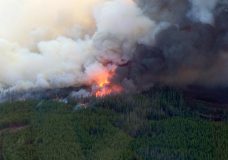 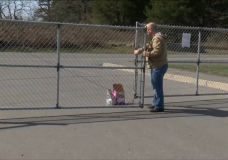