Victoria’s Crystal Pool replacement project may start all over

Posted: Jan. 6, 2020 6:02PM | Last Updated: Jan. 6, 2020 6:17PM
CHEK
WatchCity of Victoria staff are proposing starting from scratch on the Crystal Pool redevelopment project. As Jasmine Bala reports, it's a proposition that would see a new feasibility study lasting 14 to 16 months and costing hundreds of thousands of dollars.

The City of Victoria is no closer to replacing the Crystal Pool facility than it was three years ago when it began the project.

City staff are recommending a new feasibility study that will focus on the programming of the facility, location and design. The report will go to council on Jan. 9.

“If it’s the direction that council decides to go in, it’ll be different because it’s looking through an equity lens which is a new element,” said Mayor Lisa Helps.

The feasibility study will cost up to $725,000 and will include a project advisory group made up of members of the community that weren’t consulted initially. It’s expected to take 14 to 16 months.

Designs for a new facility were near complete back in 2018, placing the new pool right next to the old one. Some people living in the neighbourhood, however, were concerned about that.

“They were going to build the new pool on top of the park over here where the basketball court is, and the tennis courts and the playground,” said Allison Ashcroft, a board member of the North Park Neighbourhood Association. “So that was going to take away amenities from park users who tend to be more local to our neighbourhood.”

The association suggested using the parking lot behind the Save On Foods Memorial Centre. The city has also looked into using the Central Middle School field. Both of these proposals, however, haven’t gone anywhere. Instead, the project has just been delayed, leaving some pool users frustrated.

“Why couldn’t they go with the first plan? Why couldn’t they make up their mind two years ago?” said Sheenagh Morrison, a special Olympics competitive swimmer who has been using the pool for more than 19 years.

“It means everything to me,” she explained. “If we didn’t have the Crystal Pool, I would have nowhere to swim, I wouldn’t be able to see my teammates and my friends.”

That’s something Helps is taking into consideration ahead of the council meeting.

“Do we want to spend another 16-20 months planning or do we want to go ahead with the project that we have in place that would be ready to go sooner rather than later?” said Helps. “So that is the very difficult decision we are going to have to make on Thursday.” 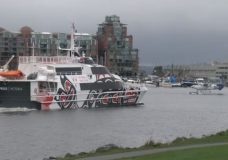 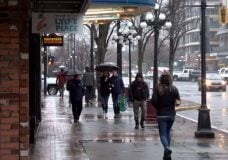