WATCH: Some in Victoria are trying to change a traditionally male-dominated field. Saturday, a workshop was held to introduce young girls to computer programming. Called “girls learning to code,” the objective was to create a video game that also addresses a social or environmental issue.  Luisa Alvarez was there.

Coding has everything to due with technology so it should come as no surprise that it’s an important skill to have when preparing for the future.

While the current industry is male dominated Canada Learning to Code is hoping to change that, and is hosting workshops teaching girls aged eight to 13 to learn and get started early.

“A lot of the jobs that exist now are not going to exist when they are in the job market its really important that we prepare them for the future that is actually going to exist. Knowing code even if its not directly part of your job it will indirectly be part of your job,” said Christina Jones the youth chapter lead Canada learning code in Victoria.

By the end of the workshop, with the help of the mentors and teachers, the girls will learn to code their own video game that addresses an environmental issue which will be the theme of their game.

“Games are a lot of fun but we can also do good with our skills and that resonates with a lot of people and I hope it will resonate with the girls,” said Instructor Aurora Walker.

The girls got a chance to make graphics and build characters to go along with the bee theme as well as learn to code audio.

“Maybe music for their game or sound effects for winning or for failing or for crashing or which ever and we will put it all together in one big game that they can play and show their friends,” said Walker.

Organizers say exposing girls to coding while their young will keep them interested and encourage them to peruse it later on to help change the numbers. In Canada only 24 percent of the software engineering workforce is female.

“It is kind of one sided the female perspective is a lot different we need diversity in age in race in general ethnicity. It makes better software that is available and can meet every bodies needs,” said  Kate Chin Aleong the youth chapter lead for Canada learns to code. 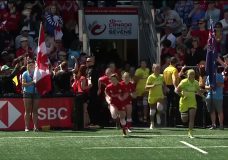 Canadian squad finishes strong on day one of Canada Sevens 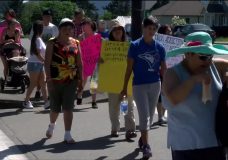