WATCH: Several people gathered in Port Alberni Saturday to bring awareness to the dangers of drug use amid the current overdose crisis. Dean Stoltz reports.

Say no to drugs was a chant heard during a walk on Saturday in Port Alberni.

It’s a simple message to a not so simple crisis that continues to grip B.C.

No one knows how devastating the opioid danger can be than many of the people who took part in the walk.

“My brother is an addict and it hurts to see him the way he is,” said Chantel Moore. “I almost lost him about a month ago to an overdose and it took three needles to just bring him back.”

They hope the walk and others to follow in other Vancouver Island communities will reach anyone thinking of taking drugs or dealing drugs and even those in the justice system.

“Because we’re losing way too many young people and I feel the drug dealers need to be dealt with, I just feel like nothing’s being done.” said walk organiser Grace Frank.

Their pleas come on the heels of the latest B.C. Coroners Service report on illicit drug overdoses that show the number of deaths in the province are on the rise.

“I?m hoping anybody who is thinking about trying any drugs for the first time will see this and realize it?s not it worth it, don?t even try, all it takes is one little bit with the wrong dosage and fentanyl can kill them,” said Moore.

“I just want to draw awareness to other people that don?t have a clear understanding about what drug addiction is as opposed to alcohol addiction,” said Eddie Frank. 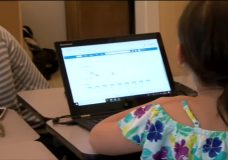 One man dead after single-vehicle crash on Mayne Island