Victoria man fined $2,300 for party argues he was following most guidelines

August 25, 2020 updated
CHEK
WatchThe man who received the city's first fine for a gathering during the pandemic is speaking out tonight. He says he took steps to keep his guests safe and had nowhere near the maximum amount of 50 people in his small unit. But his neighbours disagree.

The man who was the first to be fined $2,300 in Victoria for throwing a party during the pandemic is speaking out, arguing he followed most guidelines to keep guests safe.

“I had a party man. It wasn’t even a party, it was like a hangout. I gave everybody hand sanitizer, I took everyones name down, I showed the cops that and they did not care, they said whatever you are getting the ticket.”

Victoria police say they responded to a party in the 1000-block of Fort Street Friday night around 7 p.m. and gave a warning. They say once they returned and saw more people arriving they found around 30 people inside who were not physical distancing.

They say the room was densely populated, hot, and that moisture had built up on the windows. Early Sunday morning they returned again after reports of another party. A partygoer was arrested and fined more than $200 after refusing to leave a party.

Christian says he was nowhere near the limit, some had masks and that the only rule he failed to follow was physical distancing.

“It wasn’t that many people man. It’s not like I had 250 people not weaning masks, 80 per cent of the people in the house were wearing masks,” he said.

“In this small space [we can’t socially distance]… but that’s why we kicked people out because the cops were coming. So no, we weren’t following it, but when the cops came here there were only 15 people here. ”

Others in the building say Christian has thrown multiple parties during the pandemic, and they are worried about the spread of COVID-19 in the building.

“There was vomit outside my door a few days ago,” said one resident who lives on the same floor.

“Some nights I come home there are people in the hallway who look like they are in high school or maybe university. It just makes me nervous when there are that maybe people coming and going in the building, touching the door-handles and pushing the elevator buttons. It puts everyone at risk.”

But Christian says he plans to fight the ticket and says Victoria police have been harassing him for some time.

“I am fighting them in court, me and everybody who was at this party are going to testify and say we were a meter and a half apart like we spread it out and everything.”

But with all the attention he says he is sorry.

“Everyone is mad at me for it, literally all over B.C. and it’s just like I’m sorry it wasn’t that many people man, it’s not like I had 250 people.”

He has already been evicted and has to leave by the end of the month. So he is searching for a new home.

“Probably somewhere more on the outskirts where I can do my own thing,” he added. 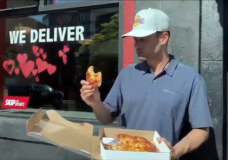