Horse-drawn carriage rides are a popular tourist attraction in the B.C. Capital. But horse carriage operators are speaking out ? saying their drivers and customers are facing increasing harassment and verbal abuse from animal advocates, multiple times a day.

“Some of the things I really can’t repeat and there’s foul language used repeatedly at this point,” says Donna Friedlander of Tally-Ho Carriage Tours. “I think what made us go public was one of the carriage drivers was attacked on a very personal level based on sexual orientation.”

Friedlander says racial slurs were then uttered at the guests.

“It’s embarrassing,” she says. “I’m worried for my drivers but it’s embarrassing for Victoria. Of course, they’re going to go home and tell the story of being on a carriage in Victoria and have somebody come up and say these horrible words.”

“I was just walking by and a lady on a bike travelling down the road started shouting abuse at the guy,” says Paidraig McMullen, a downtown worker who says he witnessed verbal abuse on his lunch break Monday.  “I caught a bit of it and I think it was along the lines of, ‘keep hitting those horses, you loser’.”

Victoria’s horse carriage industry has been under fire by animal rights’ groups for years but they say they protest peacefully and have nothing to do with the harassment.

“We don’t know anything about it and it has nothing to do with us,” says Kelly Carson of the Victoria Horse Alliance, which wants horse-drawn carriages banned in the Capital Region. “We would never, never allow that kind of behaviour.”

Carson says they’re focused on the safety of the horses and she says this video the Alliance posted last week of two horses struggling to get up after a fall Ogden Point proves the animals are in danger.

“They do get into distress in the city and that’s all we’re putting out to the public,” Carson says. “These animals are in danger in the city every day in the streets.”

As for the harassment and verbal abuse, tour operators say it’s become so bad they’ve had to involve the police. 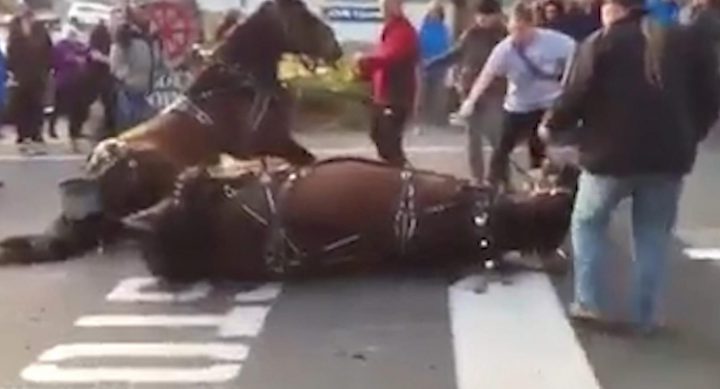 An image from a video of a carriage horse fall in Victoria that is circulating on social media. 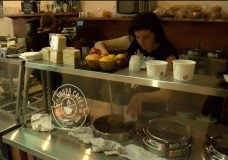 City of Victoria to consult industry regarding single-use items 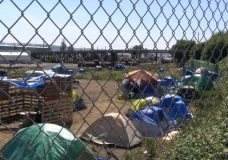