WATCH: Emotions are running high at Nanaimo’s tent city after RCMP moved in on Tuesday to take down a fence that was blocking access. Activists say as many as 100 homeless people have been calling the downtown site home since it set up last Thursday but death threats and fear over security in the downtown has people there on edge now.

A group of people who are homeless built a human fence Tuesday at the downtown Nanaimo site they’ve claimed as their own.

They were to let RCMP in to take out fence panels that have until now have been blocking authorities access to the growing tent city.

“We have strength in numbers,” activist Mercedes Courtoreille told the crowd.

Soon after the human fence was created, the arrests started. Some at Nanaimo’s tent city say the fence is their only protection from growing anger in the community that has spiralled now to death threats being levelled at the group.

“We get treated like garbage bags on the street,” said homeless man Joe Fields.

“Death threats, all kinds of death threats on Facebook and stuff for being here,” said homeless man Mike Pindar, adding that some of the threats mention firebombs or molotov cocktails.

“We’re just letting these guys know if they take that gate, off they’re putting us all in direct risk,” said Pindar.

The fight didn’t stop workers from dismantling the gates that the camp’s members acknowledge stopped RCMP entry in the middle of the night for several nights in a row.

“Because of the brush in here; as it gets hotter, the risk of fire gets bigger and bigger.”

The homeless and activists supporting them insistent the danger of removing the fence is greater than the fire risk.

“There’s multiple threats to burn the camp down,” said Courtoreille.

“There are threats of bringing the paintball guns in and shooting everybody with paintball guns. There was somebody who called for a culling.”

CHEK News couldn’t verify the threats but Nanaimo RCMP say if a complaint is made, they will investigate.

“As long as these people stay inside these gates we’re not going anywhere.”

Fuller says officials are now taking a wait-and-see approach to deal with the tent city, but after Tuesday’s ordeal to gain access, it’s unclear how long that plan will work. 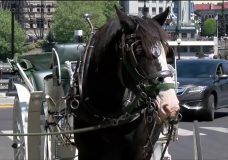 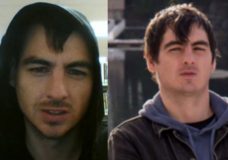