WATCH: High gas prices in the capital region are causing major speed bumps for a cancer patient driving program. The Cancer DriveLine Society says they have been struggling to maintain services since prices spiked last month. Isabelle Raghem has the details.

Judith Cameron and Tony Quinton are among the 90 volunteers with the Cancer DriveLine Society who get on the road several times a week to help cancer patients in the capital region.

The program has taken more 900 patients to and from their appointments at no cost.

“We pick them up at the designated time, wait at the clinic for them and as soon as they’ve had their treatment they get out and their driver is waiting for them,” says Cameron, the Cancer DriveLine Society Vice-President.

“I’ve taken taxis out from Sidney to [Victoria] and it costs like $50, $60… we go out to Sidney and Metchosin,” says Quinton, who has been a volunteer driver with the society since its launch in 2015.

Drivers go out to all thirteen municipalities in the capital region as far as Langford, Metchosin and Sooke.

“Many people in those areas don’t have cars any longer and the bus services isn’t always reliable when they have their appointment times so they really are stuck,” adds Cameron.

Drivers are only payed for their mileage, but with the recent spike in gas prices the Society says they can’t keep up.

“Many of our drivers are seniors and many are fixed income and they’re giving their time but they can’t necessarily give their money to cover gas,” says Cameron.

“I know some of the drivers have felt that they can’t afford to drive as much as they had in the past,” adds Quinton.

Volunteers say putting the brakes on the service would be devastating to patients who don’t have the means to take cabs daily.

“[Many patients] just can’t afford it. The money’s not there,” says Quinton.

“The last thing we want to do is charge for rides. People that are going through cancer have enough on their minds,” insists Cameron.

The Society is calling on the community for donations by calling them or by visiting their website.

The Canadian Cancer Society ran a similar program for over 20 years until October 2015 when they said they had to end the program “to maximize every donor dollar”.

A month later, volunteers in the capital region got together to create the Cancer DriveLine Society. 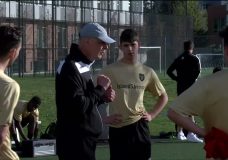