Star gazers on Vancouver Island were in for a surprise Friday night when noticing a string of lights shooting through the sky.

Video footage captured the lights visible above Greater Victoria, including downtown Victoria to Pedder Bay near Metchosin and beyond near Ladysmith.

CHEK News received numerous emails from those who spotted the lights, with one tipster claiming it was a UFO and another who thought it was a comet shower.

But the most likely explanation is a new batch of satellites blasting off from a southern U.S. state.

Once released, Starlink’s satellite fleet begins to fan out and appear as a long line of light against the nighttime sky.

“It just happens to be visually stunning and if you’re not aware of what it is, you might indeed say, ‘Well, UFO until I know what it is,'” said Peter Vogel, a retired physics teacher based out of Vancouver.

“No one has launched that many satellites, no one other than SpaceX. And there’s still another seven to eight thousand to go,” he said.

The technology columnist has written extensive articles on Starlink and says these sightings will continue until the company’s constellation is complete.

Other experts say these launches are a double-edged sword.

Jim Todd, space science education director for the Oregon Museum of Science and Industry, says having excess satellites in orbit can act as “pollution” to scientists.

“These Starlinks are supposed to have a shield that will not reflect the solar panel because they’re becoming a growing problem for observatories,” Todd told CHEK News. “They’re trying to get data, they’re trying to get images… and it ruins the image.”

However, Todd says it also garners interest in astronomy.

“There’s been more and more curiosity and more excitement,” he added.

According to Spaceflight Now, each satellite weighed about 650 pounds and was flat-packed to fit inside the Falcon 9 rocket’s nose cone for liftoff.

The latest launch follows a previous SpaceX mission on April 29, which was also visible from Vancouver Island.

Spaceflight Now says SpaceX has two more Starlink missions scheduled before the end of August, meaning another evening spectacle could be on the horizon.

FindStarlink.com tracks when Starlink satellites are expected to be visible at specific locations.

What an amazing view in sky tonight. Saw a string of lights fly (west to east direction) through the sky in Victoria today at 9:46pm. Most likely explanation (on google) is that they were satellites launched from SpaceX‘s Falcon 9 orbital class reusable rocket @SpaceX @yyj pic.twitter.com/6894UFLAWl 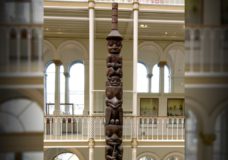 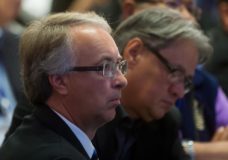