Just after 3 p.m., the U.S. Navy’s largest destroyer, arrived at CFB Esquimalt. The US Navy sailors who arrived plan to explore the city and showcase the destroyer.

The USS Zumwalt missile destroyer (DDG-1000) left San Diego on March 8 for its first operation. The 610-foot (186 metres) has an electric propulsion system, a wave-piercing tumblehome hull and stealth capabilities meant to reduce the ship’s radar cross-section. It is 100 feet longer and 13 feet wider than the Arleigh Burke-class destroyer.

“This aids her role as a multi-mission surface combatant and improves the fleet commander’s options for delivery of naval combat power to meet the Navy’s emergent mission requirements,” Capt. Andrew Carlson, the ship’s commanding officer, said in a statement. Carlton is the ship’s third skipper and assumed the ship’s commanding duties in November.

The USS Zumwalt is part of the U.S. 3rd fleet, which leads naval operations in the Pacific and helps train naval forces around the world. The U.S. Navy commissioned the USS Zumwalt in October 2017 as the lead ship in its class. It is the first ship named for Adm. Elmo Zumwalt, the chief of naval operations during the Vietnam War. 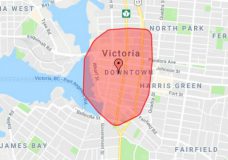 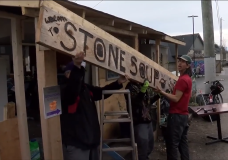 Stone Soup tears down structure that didn't have building permit