The BC Coroners Service says at least one person is dead after three people abandoned a Canadian fishing boat taking on water southwest of Port Renfrew, near Cape Flattery, Wash., Tuesday morning.

The United States Coast Guard rescued one fisherman Tuesday morning and later confirmed two other people with an “unknown” status were recovered later the same morning.

According to the U.S. Coast Guard, the incident occurred about 136 kilometres (85 miles) offshore of Cape Flattery in Washington state. There were three people on the 20-metre (66 foot) boat.

The U.S. Coast Guard said watchstanders at multiple Coast Guard units received a radio hail for help at about 2 a.m. PT from a person aboard the Canadian-based commercial fishing vessel Arctic Fox II, reporting the vessel was taking on water and the three people aboard planned to abandon ship.

The fisherman who hailed for help said they were wearing survival suits, the U.S. Coast Guard said. At the time of the mayday call, the water temperature was 14 degrees C with three to four-metre waves. The wind was 25 knots, gusting to 35.

Once they arrived, Coast Guard aircrews immediately found a lifeboat with one survivor inside and hoisted him into the helicopter.

Cape Flattery is the northwesternmost point of the contiguous United States. It is just south of Port Renfrew on Vancouver Island, across the Salish Sea.

The BC Coroners Service confirmed Tuesday it has been notified of at least one death and won’t be releasing further information until the next of kin is notified. All crew on the boat are from Vancouver Island.

Crews from the CC-115 Buffalo Aircraft and a CH-149 Cormorant Helicopter from 19 Wing Comox took part in the search.

The Arctic Fox II is registered out of Victoria. It was built in 1947. The boat left Cowichan Bay about a week ago to fish for tuna. Teague Fishing Corp. of Shawnigan Lake, B.C., is listed as the owner of the boat.

The boat was used as a whale hunter ship in 1997’s Free Willy 3: The Rescue, according to Fishing News. 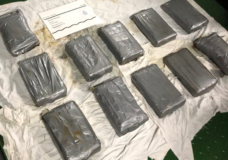