Paul Larouche has his camera, his metal detector and his pan. He’s ready to look for some gold.

“I can’t even explain that feeling cause just to know that something as vibrant, bright, shiny, yellow like that is just sitting amongst this dirt where I grew up just swimming and stuff. I’s unbelievable,” Larouche said.

Larouche is a full-time treasure hunter and YouTuber who goes by PioneerPauly. He has 219,000 subscribers and some of his videos have millions of views.

His gold panning journey began just three years ago and was a turning point in his life.

“When I was younger, I had a ton of anxiety,” Larouche said. “I was afraid to leave my house, I had an eating disorder, I was homeschooled and I struggled so hard for motivation of any kind.”

Then three years ago, Larouche’s cousin took him out to look for gold in Sooke River.

“I thought it was kind of like such an old school, weird way to have fun,” he said, laughing.

But he did it anyway. And he struck gold, finding his very first piece that day.

“I came back the very next day, consistently, for 11 days straight to the same spot that he showed me and I just kept doing it,” Larouche said. He quickly fell in love with it.

With a background in film, Larouche decided to film his adventures and post them online. Little did he know it would take off the way it did.

“I left my previous job a couple years ago,” Larouche said. “I do this full time. I travel the world, I look for gold underwater, up in mountains, I hike many places, have different claims. It’s almost surreal, that people are recognizing me and my logo even in my own hometown.”

Larouche began his journey as a solo explorer. But one day a couple of years ago, he bumped into Andrew Zradicka.

They chatted that day for 30 minutes and quickly became friends. Zradicka introduced him to the Sooke mining scene, and the two began to work together on his claims.

“He started finding some serious gold on my claims, bigger gold than I’d ever seen, Zradicka said. “Once we knew the potential, it was game on.”

The two were out there nearly every day, Zradicka mining for gold aboveground and Larouche working his magic underwater.

When it came time to scope out new claims, Zradicka and Larouche became the ultimate team. In an hour, they could tell if there was gold in the area.

Zradicka eventually began his own YouTube channel, with Larouche’s encouragement, called ANDYTHRAXX MINING. He now has 17,000 subscribers of his own.

“Everyone should try panning,” he said. “The thrill of finding it like that is unbelievable.”

Now, Zradicka and Larouche are on the hunt for their next big find. 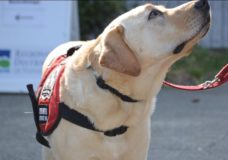 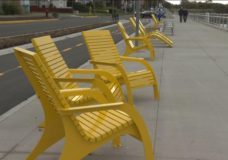