The veteran went years missing them due to his fear of crowds. He gives all credit to his service dog Fisher.

“He means the world to me,” said the Jim MacMillan-Murphy, a Victoria resident.

The retired Canadian Forces Peacekeeper lives with post-traumatic stress disorder (PTSD). MacMillan-Murphy said he would be gripped by fear in crowds and the loud noises of gatherings would send him right back to bombs erupting in Cyprus in a few seconds.

“My view switches from a coloured picture to a black and white picture, which Fisher, when he notices that I’m starting to zone out, he will paw me, he will make a sound, he will lie on my foot,” said MacMillan-Murphy.

After waiting for years, he spent $14,000 of his own money to get a trained PTSD service animal, that was prescribed by his psychiatrist and according to the 63-year-old, Fisher has saved his life.

“This is the best health therapy that’s out there,” said MacMillan-Murphy.

According to Vancouver Island Compassion Dogs (VICD) what was already a long wait for a service animal, as long as a year, was made even worse by COVID-19 as the pandemic put back training of animals over five months.

“We’re really struggling to keep up with the demand with all that’s going on,” said Vancouver Island Compassion Dogs’ Executive Director Mike Annan

“The demand that was before the pandemic was huge and now it’s just exacerbated by all the mental health issues that have come along with it.”

With funding from Wounded Warrior Canada, the Royal Canadian Legion, and the public, VICD is training and homing as many as 30 dogs a year with veterans, but the waitlist has now grown to two years long.

Cowichan-Malahat-Langford MP Alistair McGregor is calling for federal funding for service dogs, to reduce the backlog.

“Right away “When you can see the benefits in front of you,” said McGregor. 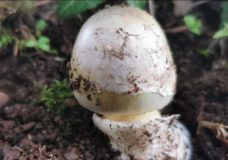 Suspected death-cap mushroom found in Comox could be fatal

Some staff at B.C. casino chose 'not to get' rules on suspicious transactions, inquiry hears