With sidewalks buried under snow, some people on Vancouver Island are choosing instead to walk on the plowed roads.

“I think they should plow the sidewalks and leave the roads, everyone should stay home or walk, it’s safer,” said Nanaimo resident Amy Harper.

Island Health confirms emergency room visits for slip and fall injuries are up since the snow started falling. In fact, they have seen five times as many in the past two days.

For people like Bob Larsen, who has mobility issues, the snowy sidewalks can be even more of a challenge.

“Oh ya you gotta know what you’re doing that’s for sure,” said Larsen.

“If you get your weight really centred and stuff like this nothing’s going to stop you too much,” he said.

Victoria bylaw officers have been out for two days encouraging business and homeowners and landlords to get shovelling —it’s supposed to be done by 10 a.m.

“There is the potential for people to be fined. We don’t jump to fines but you can face $125 fine if there is non-compliance,” said Victoria Bylaw Services Supervisor Adam Scheffield.

Scheffield says part of the problem is many businesses were closed on Wednesday, but he says overall people have been doing an excellent job.

“The level of compliance when we spoke to people was impressive and I think everyone is rolling up their sleeves and trying to get things done,” he said.

Adrienne Carter says her BC Transit driver pitched in to help Thursday morning. They were riding through Fairfield when the bus driver stopped to help push someone in a wheelchair through a slippery stretch of sidewalk.

“It was nice to see he was able to help him out,” Carter said. 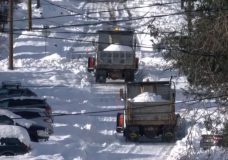 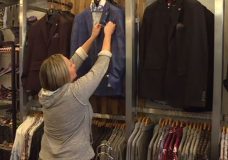