Posted: Jan. 16, 2020 6:03PM | Last Updated: Jan. 16, 2020 6:17PM
CHEK
WatchBusiness owners in downtown Victoria say crime is on the rise, specifically shoplifting. And calling 911 doesn't seem to be the answer. Now some are turning to private security to protect their businesses and themselves. Mary Griffin reports.

During a lull, Nicole Salthouse straightens up a rack of shirts.

She and her husband opened their clothing store 15 years ago. They’ve seen lower Johnson Street change over the years, including one disturbing trend.

“I’ve seen more of it happening in the past two years,” Salthouse said.

The trend is shoplifting at her store, Mango.  Thieves come in, grab merchandise and run. When it happens, Salthouse calls 911. More often, she’s on her own.

“Trying to get a hold of 911 or non-emergency, you are on hold for fifteen or twenty minutes. And then it’s your frustration level grows,” Salthouse said.

That’s why Salthouse and other business owners on lower Johnson Street are looking to hire private security to protect their businesses. Victoria Police Chief Del Manak says he understands, but officers just can’t get to many calls.

“We have between 25 and sometimes upwards of 45 calls for service that are holding where people have phoned 911.  And they’re waiting for the Victoria Police Department to respond to their emergency,” Manak said.

There is a financial impact of this that trickles down everyone, according to the Downtown Business Improvement Association executive director, Jeff Bray.

“The more theft that occurs impacts the ability to employ people. People rely on their jobs to pay their rent. if they get reduced hours, they struggle to make their rent.  So it has broad implications that we need to help support our businesses,” Bray said.

But those positions are still in the planning stage. So businesses may have to wait, again, for help. 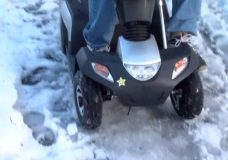 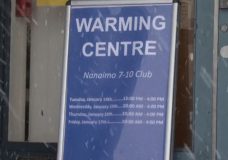 Warming centre opened in Nanaimo during this week's cold spell