Many businesses in Greater Victoria say they’re having trouble attracting and retaining workers because of a lack of affordable housing. Calvin To reports.

Many businesses in Greater Victoria say they’re having trouble attracting and retaining workers because of a lack of affordable housing.

According to Chemistry Consulting, in a new survey involving 250 businesses in the capital region, 78 per cent of respondents reported having trouble recruiting for entry-level positions, 42 per cent said it was difficult to hire middle managers and 24 per cent indicated senior management positions were challenging to fill.

The main reason, according to respondents, was the cost and availability of housing.

“The economy’s booming right now but this is not sustainable,” said Frank Bourree, partner at Chemistry Consulting. “If we can’t bring in enough workers, it will constrain growth in the Greater Victoria area.”

Cooks, bus drivers and software engineers are among the professions most lacking in workers, according to Bourree.

At the same time, realtors say market conditions are making basement suites and income properties a popular option for buyers.

“People generally jump on the opportunity to have a suite in their home if they are deciding to be a homeowner,” said Lindsay Block-Glass, realtor at Royal LePage Coast Capital Realty. “It gives them that mortgage helper and it helps them buy a property that’s potentially worth more.”

Meanwhile, the rental crisis is putting a strain on prospective tenants.

Amanda Jepson, who works a minimum wage job, has been searching for a new home for two and a half months.

She, her young daughter and extended family live in two suites in a home in Victoria. But the home was recently put up for sale.

Jepson says she has trouble finding a place within her budget.

“It’s either I eat or I have a roof over my head,” Jepson said.

Many rental units have restrictions on pets or children that are further reducing her options. Jepson now fears she might be homeless.

“My boss even offered me his freezer at work for me to live in if I can’t find anywhere else because I don’t even have a car to live in,” she said. “It’s just basically on the streets for me.” 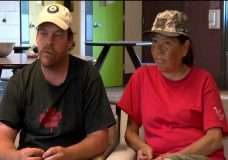