Gordon Martin, the owner of Foghorn Fishing Charters, says Chinook is the number one fish of choice for his clients.

But his boat is staying anchored for today – and likely longer.

On March 31, a surprise decision from the Department of Fisheries and Oceans (DFO) cut his fishing season short.

Until further notice, all chinook fishing on B.C.’s coast is strictly catch-and-release.

“So, from a business, it’s absolutely cutting my throat,” said Martin. “How do you run a business when somebody, a local, across the street from the Marina, says I’d like to go fishing. When can I keep a salmon? I have no idea.”

The chinook fishery is protected and the current measures are meant to protect the fish on their way to spawning grounds in the Fraser River.

During the last opening in the summer of 2020, it allowed for only two chinook salmon per person.

Those in the industry, however, such as Chris Bos, President of the Southern Vancouver Island Anglers’ Coalition, say there’ll be few takers with a strictly catch-and-release program.

“The vast majority of people who go fishing on the ocean, they want to be able to bring home a chinook as part of their going out for a fishing trip,” said Bos.

Groups, along with the Coalition, want fishing open to the millions of hatchery salmon now swimming in the coastal waters but Bos said there is no indication that’s going to happen.

“If it continues, this fishery in southern B.C. won’t be able to last much beyond five years. But what we’re asking for is a lifeline,” said Bos.

“Nobody’s going to survive over time. It’s not going to happen overnight,” Martin said. “But all these marinas, I got fuel for the boat the other day and the gas dock said it’s worse than last year. So you know, how long is everybody going to survive for?”

There is no word on an announcement from the Department of Fisheries and Oceans if and when the fishery will open. 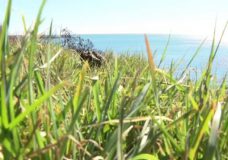 Record-breaking heat on Vancouver Island expected to continue into Saturday