The Westshore Rebels avenged their only loss of the regular season, as they defeated the Okanagan Sun 30-19 at Westhills Stadium last night, clinching first place in the BCFC and guaranteeing home-field advantage for the post season.

The Sun handed the Rebels their lone loss of the 2017 campaign all the way back in Week 1, and both teams were tied for first place heading into the final showdown. The Rebels running game was dominant, as Westshore halfback Trey Campbell rushed for countless yards and two touchdowns on the night. The Westshore defence was also on point, as they sacked the Okanagan quarterback numerous times throughout the game, and constantly put the pressure on the opposing offence. The Rebels also maintained their home winning streak, as they finish the season undefeated at home, a streak that dates back all the way to the 2015 season.

“It feels good because we were working towards this the whole season,” Rebels quarterback Scott Borden says. “After that first loss, it was kind of a good thing for us because it kind of set us back and showed us where we needed to go, and then all year we had something to work for and we knew that this last game was going to be the rubber match, so we came out and got the job done tonight.”

“It feels fantastic,” Rebels Head Coach Charly Cardilicchia says. “This has been quite the journey, there’s a lot of learning going on this season, obviously as a rookie head coach, there’s a lot more to coaching football than just the football stuff so, all the ups and downs that we went through and the things that we’ve overcome as a football team, to get the nine wins in a row and take first place and home advantage throughout, for our fans for our football community, it’s a massive feeling for us.” 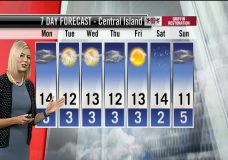 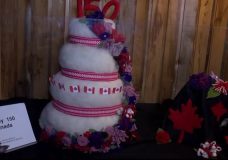 Fibre takes the spotlight in October exhibit at Sidney Museum