The fire in Nanaimo’s Bowen Park on Wednesday was the 12th fire that bylaw officers responded to so far this week, putting firefighters and residents on alert.

Smoke billowed out of the tree tops of Nanaimo’s Bowen Park on Wednesday morning and could be seen for kilometres around, as a burning homeless encampment spread into the dry forest.

“We got multiple calls on it and when we arrived on scene it was starting to get into the trees,” said Nanaimo Fire Rescue Capt. Jason Battle.

“We’re sending all resources to these fires in these conditions,” he said.

The city is currently gripped by a scorching heat wave and rash of similar fires in the largely undeveloped 38 hectare park.

RCMP tell CHEK News the fires are considered suspicious because they aren’t believed to be caused accidentally, but say they do not think there is a “fire bug.”

Bowen Park is considered a jewel in Nanaimo full of trails and nature, but according to community outreach workers, it is also now home to an estimated 40 or more homeless people who are cooking meals in the forest.

“All through the park,” said Doug Hiltz, a Community Outreach Worker, with Stone Soup. “And they come out at night and get their food.”

Battie says the dry conditions in the park make cooking a high risk for fires.

“Due to the fuel that’s brought in like propane and gasoline which would increase the spread and the intensity of the fire is what we’re concerned about with these homeless camps,” said Battie.

John Naysmith’s Nanaimo home borders the park, and he says the fire risk concerns him.

“This could go on in the middle of the night while we’re all sleeping and then what are you doing,” said Naysmith, who has lived along Bowen Park for 21 years.

Because according to Nanaimo Fire Rescue, the suspicious fires have been happening one after the other. Just three hours earlier, firefighters extinguished a brush fire off Third Street. It was also a homeless encampment, that neighbour Linda Roden tells CHEK News she’s been on edge about all summer.

“It’s a daily issue. I walk through here almost everyday and I think one day the whole thing’s gonna go up and somebody’s gonna get killed,” said Roden.

Nanaimo bylaw workers say this is the 12th fire that they have responded to in the last week alone, despite signs warning of the fire risk.

“That’s dangerous because there’s people living around here. They gotta put a stop to it but how do you do it? I mean if there’s a bush there’s somebody living in it,” said Naysmith.

So firefighters are on alert for smoke, as this heat wave stretches on and dries out forests even further.

No one from the City of Nanaimo’s bylaw department returned CHEK News’ requests for comment on what it is doing to reduce the burning threat. 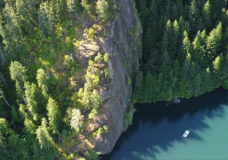 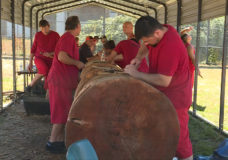