Players from Sunshine Coast and Vancouver Island gathered to raise money for family of Chris Godfrey.

Batters and runners willingly wore helmets Monday as slo-pitch players from Vancouver Island and the Sunshine Coast gathered in Powell River to play their favourite game in a fundraiser.

Many of them were still in shock about what happened to Courtenay player Chris Godfrey just over two weeks ago.

“It’s devastated pretty much every slo-pitch league in every town and we’re all thinking about him and his family and it’s just a horrible tragedy.” said Ben Veenhof who organized the tournament.

“I think it collectively breaks our hearts where this, you know one year-old daughter and this young wife are now because of this sport we love.” said Powell River player Adam Forsyth.

Godfrey died Wednesday after being on life-support since the accident.

It happaned during another charity tournament August 19th in Courtenay where on a play at first base he was hit in the back of the head by the ball. He never recovered.

Today, players from his league in the Comox Valley gathered in Powell River to help raise money for his family.

“It’s just been a huge outpouring of love and support for Chris and Amanda and I’d like to be a part of that” said Courtenay player Jesse Morgan. “I mean this has been a huge blow to our community and we just want to help out anyway we can.”

“It’s really important that we support Amanda and Faith. They’re going to need a lot of help and right now financial support is where we can help out the most so that’s kind of why I’m out today.” added Courtenay player Catherine Ruest.

There was moment of silence for Godfrey before each game.

Over a thousand players at the Co-ed Slo-pitch World Series in Kamloops this weekend also remembered Godfrey with a moment of silence.

Chris Godfrey was not wearing a helmet when he was hit which is common practice in slo-pitch but that’s beginning to change.

“There is currently a petition going that will be submitted to Softball Canada and as well to the NSA which is the regulations we are under to make them mandatory across the country so that all spawns from this incident which is pretty incredible.” said Courtenay player Breana Morgan 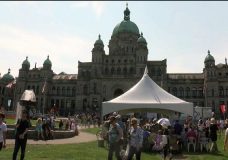 Labour Day Rally at the BC Legislature draws hundreds 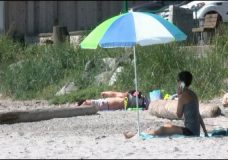 Another hot spell as record-breaking summer comes to an end