WATCH: A lawyer says some of those lashing out online could face legal consequences themselves. April Lawrence reports.

It started as an extreme case of cyberbullying ? Snapchat photos sent in the middle of the night to a Duncan teen showing her cat being shaved and drugged.

Gigi was eventually reunited with her owners and was taken to a veterinarian in Duncan where she tested positive for the party drug MDMA.

Three people have now been charged with animal cruelty: 20-year-old Joshua Lemire, as well as two youth ? a 16-year-old girl and 17-year-old boy who can’t be identified.

The story has created a massive backlash online with many identifying the teens alleged to be involved, while there are countless other comments threatening violence and even death.

UVic Psychology Professor Bonnie Leadbeater says that type of mob mentality is increasingly common on social media, especially when it comes to stories about animal abuse.

But Victoria lawyer Michael Mulligan says this is much more than just shaming, it is criminal.

“If you post on Facebook a threat to kill or harm somebody that is itself a criminal offence even if you don’t carry out the threat,” said Mulligan.

So is identifying the teenagers.

The reason is when kids are linked to a crime, the allegations can follow them around for the rest of their lives.

While many are angered that an innocent young cat was harmed, police are cautioning that some lashing out online could face consequences themselves. 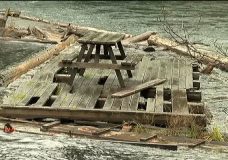