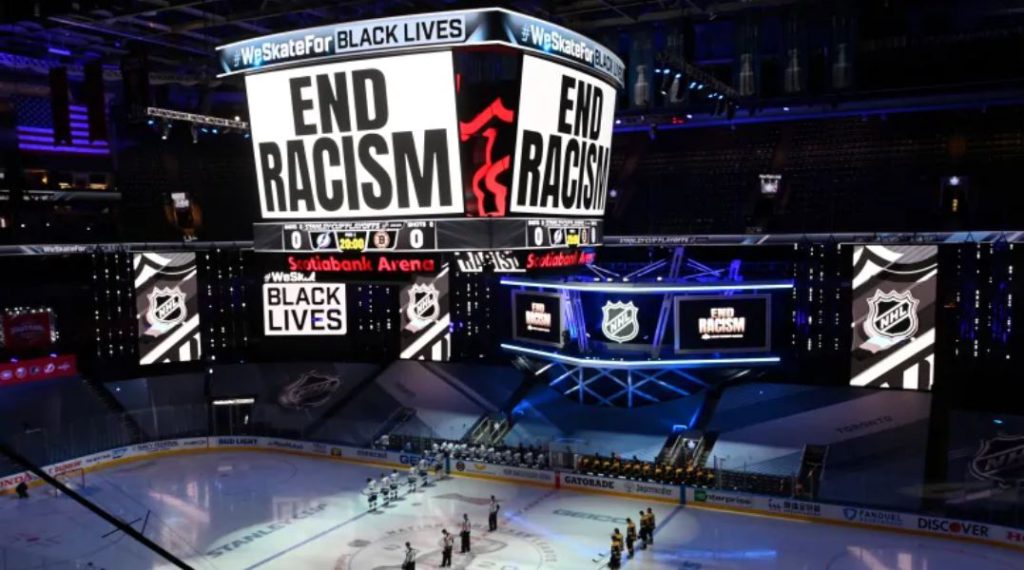 Frank Gunn/Canadian Press. Photo courtesy of CBC.
An End Racism message is displayed before the start of the Boston Bruins-Tampa Bay Lightning game in Toronto on Wednesday. The league has postponed all four of its playoff games scheduled for Thursday and Friday as part of a player protest against the police shooting of Jacob Blake.

The NHL has postponed all four of its playoff games scheduled for Thursday and Friday in the aftermath of the police shooting of Jacob Blake, a Black man, in Wisconsin last weekend.

The players requested the postponements and the league supported the decision, the NHL and NHL Players’ Association said in a joint statement released at 6 p.m. ET.

The New York Islanders and Philadelphia Flyers were scheduled to play in Toronto, while the Vancouver Canucks and Vegas Golden Knights were slated to square off in Edmonton on Thursday.

This is much bigger than sports. Credit to @Canucks players + other athletes for taking a stand, helping call attention here at home & in the US to issues of systemic racism. We must continue to listen, learn & work together to implement the change needed for a better future. https://t.co/5Y2XWu4q82

A Tampa Bay Lightning-Boston Bruins game in Toronto and a Colorado Avalanche-Dallas Stars contest in Edmonton on Friday also are off the schedule.

“Black and Brown communities continue to face real, painful experiences,” the statement read. “The NHL and NHLPA recognize that much work remains to be done before we can play an appropriate role in a discussion centred on diversity, inclusion and social justice.

“We understand that the tragedies involving Jacob Blake, George Floyd, Breonna Taylor and others require us to recognize this moment. We pledge to work to use our sport to influence positive change in society.

“The NHLPA and NHL are committed to working to foster more inclusive and welcoming environments within our arenas, offices and beyond.”

The NHL’s decision came after NBA players started a string of postponements with three games called off Wednesday when the Milwaukee Bucks refused to play Game 5 of their first-round series against the Orlando Magic. Teams from Major League Baseball, Major League Soccer and the WNBA also postponed some games Wednesday, while the NHL plowed ahead with its three playoff contests.

“There’s a lot of white athletes in here,” Vegas winger Ryan Reaves, who is black, said during a video conference in Edmonton with members all four Western Conference teams standing in the room. “I think that’s the statement that’s being made right now. It’s great that the NBA did this, and MLB and the WNBA – they have a lot of black players in those leagues. But for all these athletes in here to take a stand and say, ‘You know what? We see the problem, too, and we stand behind you.’ I go to war with these guys. I hate their guts on the ice, but I couldn’t be more proud of these guys. The statement they’ve made today is something that’s gonna last.

“These two days isn’t gonna fix anything, but the conversation and the statement that’s been made is very powerful, especially coming from this league.”

Members of the Hockey Diversity Alliance – a group including Evander Kane of the San Jose Sharks and Matt Dumba of the Minnesota Wild formed earlier this year that hopes to “to eradicate racism and intolerance in hockey” – tweeted out messages earlier in the day asking the league to suspend Thursday’s games.

“We strongly feel this sends a clear message that human rights take priority over sports,” the tweets read.

Former NHLer Akim Aliu, also part of the diversity alliance, went further in a subsequent post asking for the postponement.

“What’s more important, shining a light on social justice, police reform and inequalities of the black and brown community or playing hockey games that generate revenue for a billion dollar industry?” Aliu tweeted. “This decision should be an easy one….come on now y’all! It’s time to wake up!!!”

A brief, so-called “moment of reflection” was held before the Lightning and Bruins played Game 3 of their series Wednesday. Tampa head coach Jon Cooper was asked Thursday morning if it felt right in hindsight the game went ahead.

“I don’t think anything feels right, right now, to be honest,” he said on a video conference with reporters where only two questions regarding social justice were raised by the media. “There’s so much education that needs to go on. I know that the players, they battle hard on the ice, they compete against each other, but they also stand together, too.

“These events are happening and I think this is taking some time to digest, so it’s hard for me to answer that right now. One night of sleep is not enough to sit and digest, but I know it’s just communicating with our team and being open about what is going on. I think that’s a good first step for us in moving forward, and we’ll see what happens here.”

There was no moment of reflection before the Dallas Stars played the Colorado Avalanche in Edmonton on Wednesday night.

Flyers head coach Alain Vigneault, whose team beat the Islanders in overtime Wednesday afternoon as events across the sporting landscape were shifting, was asked Thursday before the decision to postpone was announced if he’d taken time to reflect.

“The only thing that’s been open in my room is my computer to hockey games,” he said. “I have really no idea what’s going on in the outside world.

A number of NHL players made strong statements – some even marched with protesters – in the spring after George Floyd, another Black man, died when a white Minneapolis police officer kneeled on his neck for nearly nine minutes.

The league unveiled its #WeSkateFor campaign when it restarted its pandemic-delayed season, with #WeSkateForBlackLives and #WeSkateForEquality banners featured behind the nets in both buildings hosting the resumption of play, while the “Black Lives Matter” slogan and “End Racism” has been featured on screens throughout the arenas.

Dumba, who is Filipino-Canadian, delivered an impassioned speech on the first day of the restart in street clothes before taking a knee during the American national anthem. He subsequently raised a first during both the Canadian and American anthems until his team was eliminated in the qualifying round.

Reaves, who is Black, was then joined by teammate Robin Lehner, as well as Tyler Seguin and Jason Dickinson of the Dallas Stars, as the first players to kneel for the anthems in uniform before an NHL game.

“It was a really important decision, and I think it was the right decision to make,” Canucks captain Bo Horvat said of the postponements. “We needed to do something and make a stand, and I think this is the appropriate form of action that we’re doing right now.

“I couldn’t be prouder of our group of guys to come up with this solution.” 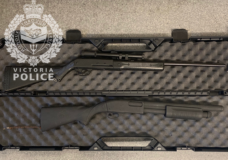 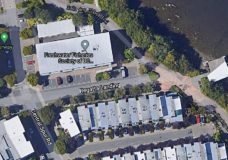