December 18, 2020 updated
File Photo
Nanaimo RCMP officers have conducted two searches this month in relation to the 18-year-old case of Lisa Young, who disappeared in 2002.

Nanaimo RCMP officers have conducted two searches this month in relation to an 18-year-old case.

Police aren’t saying what they were looking for but confirm the search was in relation to the disappearance in 2002 of 21-year-old Lisa Young.

Police conducted one search at the Nanaimo Lakes Road property Wednesday and the other earlier this month.

“I’m really glad that police are doing a search there because we’ve heard that location come up a few times just word of mouth,” said Carol Martin-Frank, Lisa Young’s Aunt.

The owners of the property say they purchased it in 2003 and they only learned earlier this month from police that they were interested in it.

The half-acre property backs onto Morrell Sanctuary, a nearly 280-acre park. The property owners say police searched some of it yesterday too.

Lisa’s story has received a lot more attention after an in-depth podcast was published about it in the past year.

On June 30th, 2002 the 21-year-old had been at a bar, followed by a party. It has been reported that she left with a man driving a Jaguar and later called a friend back at the party.

Lisa Young hasn’t been seen since.

“I’m just really glad that police are still active and following tips. I know there’s a lot of tips out there and I know they have been following them,” said Martin-Frank.

One neighbour who didn’t want to be identified for fear of retribution recalls seeing what looked like a body in a hammock in the backyard of the Nanaimo Lakes Road home around the time that Lisa Young went missing.

Soon after, he says he saw equipment moving soil around in the back yard.

He says he reported this to the police at the time.

“I would just ask them to call the RCMP office in Nanaimo and talk to them. It could be anything. Even something small that you could have remembered from that night. It could help in some way,” said Martin-Frank.

Martin-Frank says the lack of answers has been really difficult on the entire family and everyone who loved Lisa deserves to know what happened to Lisa Young that night.

As people marked the 18th year since Young went missing in June, the podcast had reached 50,000 downloads. 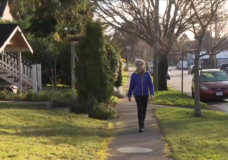 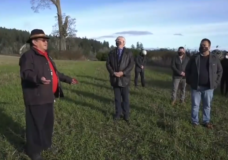