Millstream fish ladder expected to be a game changer for salmon

It’s been in the making for years, but a project that will bring thousands of salmon to Millstream Creek is now underway.

“For the last 10 years, 15 years it’s been waiting for a big project, and this is the big project,” said Ian Bruce, executive co-ordinator of the Peninsula Streams Society.

Bruce is spearheading the creation of a fish ladder in a portion of Millstream Creek, just below Mill Hill Regional Park.

Volunteers began making ladders by hand further downstream in the late 1990s, but this particular section requires more heavy-duty machinery. Bruce says the newest fishway will be a game-changer.

“Upstream of this we’ve got about six-and-a-half, seven kilometres of habitat that they can’t get to unless we built this ladder. So it’ll open up about three times much well have a total of about 10 kilometres of usable habitat,” Bruce said.

The $800,000 project was set to go in 2018, but a lack of funding held things back. But now with backing from the Pacific Salmon Foundation and the B.C. Salmon Restoration & Innovation Fund, thousands of coho will soon return to spawn. Right now, the annual return is anywhere from 250-750, but that’s about to change.

The ladder will also assist a large number of cutthroat trout.

The process will include the creation of 14 step pools to help send the salmon on their way. If all goes as planned, fish will be flowing through by September. 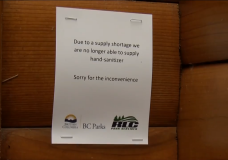 BC Parks recommends bringing hand sanitizer when visiting its parks 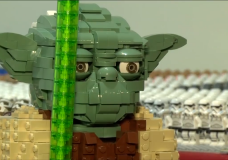