Down the stairs at the Sidney Museum on Beacon Avenue, you never quite know what you’re going to find.

“This is the LEGO Saturn Five Rocket,” said Peter Garnham, executive director of the Sidney Museum while showing one of his exhibits.

Garnham says the Saturn Five Rocket took him around 100 hours to build, and then another 10 hours after he accidentally dropped it. His prized possession is located at the museum’s entrance.

“It’s my favourite because it’s so unique. There’s not more than I would say four or five in all of North America,” said Garnham, who estimates his LEGO collections are worth well over five figures.

The four-foot-tall rocket is one of the hundreds of impressive LEGO structures on display at the Sidney Museum until July 11. There’s everything from a Star Wars section featuring hundreds of LEGO figurines to a batmobile replica from the 1989 Tim Burton film Batman.

There’s also Lord of the Rings, Harry Potter and LEGO figures and structures from the Netflix series Stranger Things.

“We have probably 800 models, close to one million bricks in making them. Probably over three-quarters of them belong to my family and myself,” said Garnham.

The rest of the structures are submitted by volunteers in the south Island community. Garnham says the LEGO exhibit began 14 years ago as a way to generate interest during the museum’s slow months from January to February. Within a few years, however, the exhibit quickly became one of the museum’s most popular annual events, bringing in over 12,00 visitors in 2019 alone.

Wednesday marked the museum’s first day open since their doors closed in mid-March due to COVID-19.

“Oh it’s a wonderful day. It’s been very challenging – we’ve achieved quite a bit of work behind the scenes while we’ve been closed,” said Garnham.

The Sidney Museum, which relies on volunteers and donations, has had to make budget cuts due to the impacts of COVID-19, yet their management says there’s no risk of the 49-year-old institution going under.

They’ve made changes to the 5,000 square-foot facility, which management says adhere to the province’s physical distancing guidelines. Upon entering the museum, there’s hand sanitizer and several notices outlying the risks of COVID-19. Also, the museum now requires visitors book online in advance.

“So you book online, you have your time slot and there’s really no other groups around. So you go through, there’s no kids you need to dodge around and you can go around and see the LEGO at your own pace,” said Alyssa Gerwing, the Sidney Museum’s assistant director.

To book a slot at the Sidney Museum, visit www.sidneymuseum.ca.

Millstream fish ladder expected to be a game changer for salmon 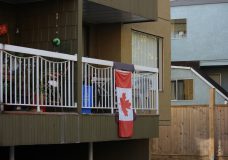