The team returned home from Tokyo late last night and smiles peeked through masks as they got off the plane carrying precious cargo.

For the first time in 29 years, Canada’s women’s eight rowing team won gold in the Olympics.

The team landed at the Victoria International Airport at 11:30 p.m. Even with this late arrival, friends and family we’re still there to welcome them home.

“It’s really cool to live on that legacy,” said Christine Roper, a member of the crew.

The team crossed the finish line in Friday’s final at Sea Forest Waterway in a time of five minutes and 59 seconds, holding off New Zealand by only 0.91 of a second.

“I just remember being in shock, like someone pinch me, is this a dream? Am I sleeping? Wake me up,” said Roper.

Roper was a member of the crew that just missed the podium at the Rio Olympics in 2016, and she knew going into competition in Tokyo that it would be another challenge.

We knew that Tokyo would be very hot so we tried to do lots of preparation throughout the year, training in the heat and trying to get our bodies to adapt and trying to figure out strategies we would use to overcome that challenge,” added Roper.

The crew flew to Japan on July 1 and had a couple of weeks to prepare and train, so by the time they arrived at the venue the heat felt almost normal.

Roper says it’s a highlight of her life, winning gold, but what really made it special, was bringing it home with her team.

“There is nobody I’d rather line up with on the start line,” said Roper. “No other Olympian before us or after us will be able to say they went to games like we did. We had an absolutely amazing time, I have lifelong memories, friends, bonds. The best thing definitely though is the medal.”

For right now, Roper says the team is taking some much-needed time off, kicking their feet up, spending time with family and friends and soaking it all in. 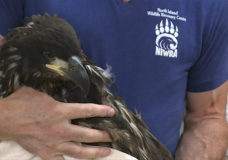 Island eagles suffering due to unusual heat this summer 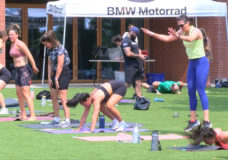