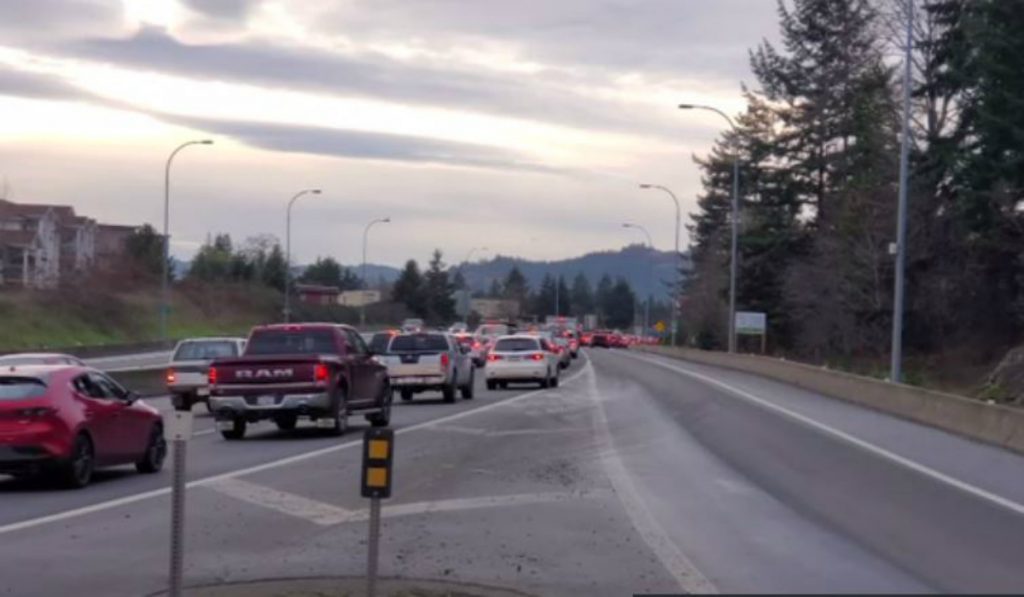 West Shore RCMP have released more information about a two-vehicle collision Tuesday that led to lengthy traffic delays on the Trans Canada Highway in Langford.

Just after 1:20 p.m., Mounties responded to a reported collision on the TCH just north of the West Shore Parkway.

Police say the driver of a northbound Mazda 3 lost control of the steering wheel, veering into the oncoming lane and collided with a southbound Honda Civic head-on.

Investigators believe the cause of the collision is due to the driver of the Mazda 3 having a medical emergency.

Traffic was shut down in both directions for more than an hour while crews worked to clear the vehicles from the highway.

Traffic is backed up all the way past the Highway 14 overpass on Highway 1. It is now starting to move a bit, as the road has been re opened just before the #malahat #yyj #yyjtraffic pic.twitter.com/eFdCo1Lo5S

The TCH opened to single-lane traffic around 2:45 p.m., then cleared just before 3 p.m.

Both drivers were taken to the hospital by ambulance with minor injuries, and there were passengers in both vehicles.

“Luckily there were no life-threatening injuries and everyone is expected to make a full recovery,” West Shore RCMP Cst. Nancy Saggar said in a statement.