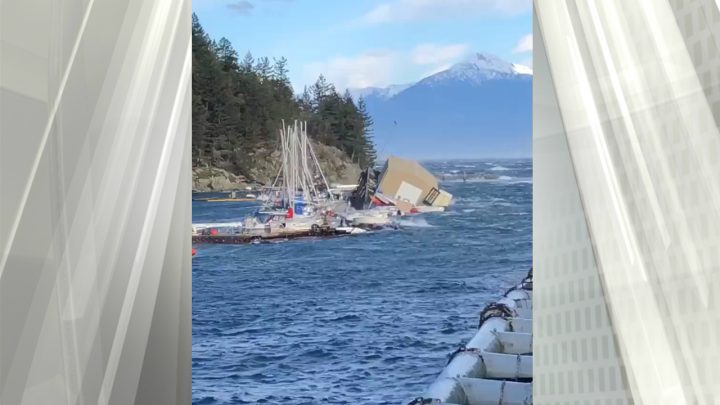 What appears to be barge hitting the dock at the Sewell’s Marina (Photo: twitter-becky far @Beccafar)

High winds that caused damage at a nearby marina resulted in the Horseshoe Bay Ferry Terminal closing for several hours Saturday.

B.C. Ferries say debris from the Sewell’s Marina was making it unsafe for vessels to dock.

“It started to wash in front the berths. And aat that point with so much debris in the water it wasn’t safe to get our vessels in and out of the terminal so we had to cancel some sailings,” said spokesperson fr BC Ferries, Astrid Braunschmidt.

Both the Queen of Oak Bay and Queen of Cowichan were sent back to Departure Bay where customers can detour to Tsawwassen through Duke Point.

Foot passengers were shuttled over to the other terminal by taxi.

Around 1:30 p.m. service resumed temporarily. However, B.C. Ferries is still keeping an eye on changing conditions.

On social media, the marina appears to be sustaining significant damage from large waves. What may be a barge, along with multiple other boats are hitting into the docks.

“Thank you for your patience as we re-jig our schedules…. Of course during adverse weather safety is our top priority. We make these decisions in our best authority,” said B.C. Ferries Spokesperson Astrid Braunschmidt. 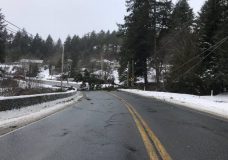 Areas on Highway 14 through Sooke open after storm blocks roads 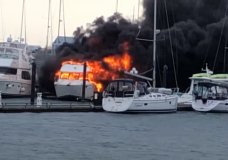 No injuries after boat catches fire at Port Sidney marina