Posted: Jun. 13, 2020 6:18PM | Last Updated: Jun. 14, 2020 12:44PM
CHEK
WatchWalks are taking place across New Brunswick today in memory of Chantel Moore, the Indigenous woman who was shot and killed by police in Edmundston. The 26-year-old is from the Island and her family members here are planning their own gathering on Thursday. Jasmine Bala has more.

Family and community members came together in cities across New Brunswick to walk in memory of Chantel Moore, a 26-year-old Indigenous woman who was shot and killed by Edmundston Police.

“She was just an incredible being that was incapable of hurting anyone,” said Laura Manson, who lives in Victoria and is related to Moore.

Moore grew up on the Island. She lived in Port Alberni before moving to New Brunswick to live with her mother and daughter. To honour Moore and call for justice, Manson is organizing a healing gathering in Victoria on Thursday.

“I hadn’t seen her since she was a little girl and to know she’s no longer here with us is just not fair,” Manson said, wiping away her tears.

On June 4, the 26-year-old was shot and killed by an officer during a wellness check. Police say that Moore was holding a knife and making threats, but her family says that it is uncharacteristic and unlike her. They’re now calling for the truth and accountability.

“Justice would look like holding this man accountable for what he has done, not a slap on the wrist,” Manson said.

The reality of Indigenous people in Canada, Manson added, is to be afraid of things like this happening.

“God forbid I need help and I get shot,” she said. “It’s a fear Indigenous people feel in Canada.”

One that even her young daughter, Violet, has brought up to her, she added.

“Last night she said to me, I don’t want to turn 18. And that’s something a child shouldn’t have to say,” Manson said.

On Friday night, 48-year-old Rodney Levi, a member of the Metepenagiag First Nation, was shot and killed by RCMP near Miramichi, N.B.

“When police arrived, they were confronted by a man who was carrying knives,” said RCMP spokesperson Cpl. Jullie Rogers Marsh.

Rogers Marsh said a stun gun was deployed several times but was unsuccessful.

“A member of the RCMP discharged a firearm,” she said. “The man was treated at the scene and was taken to hospital but died of his injuries around 9 p.m. yesterday evening.”

Levi’s death comes just over a week after Moore was killed.

The healing gathering for Moore in Victoria will be held at the legislature. People are encouraged to wear yellow to show their support for Moore’s mother, who used to say to her daughter, “Stay Golden.” Gold ribbons will be provided to those who aren’t in yellow.

Manson said she expects hundreds of people to show up and encourages everyone to practice physical distancing as much as possible during the gathering. Hand sanitizer and masks will also be available. 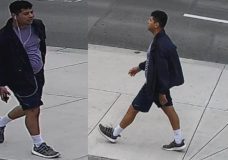 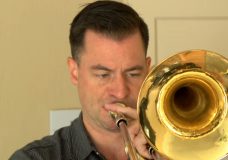