Nick La Riviere’s work has been featured on CHEK TV multiple times, you just might not know it.

So when COVID-19 hit, La Riviere knew he needed to do something to keep his bands together and came up with a plan.

He decided to get members to send in a video of them playing the same song, and then he would mash all of them together to create a single music video.

“They film themselves playing their part and then I piece it all together. I edit the audio and the video. I think I’m getting better at it! Many of them have not done a lot of recording before, so they may be surprised at how many takes you have to do to get it right, but it’s a great musical experience,” La Riviere said from his Victoria living room.

While it’s often time-consuming — some videos have over 40 parts — for La Riviere, the payoff is worth it.

” It takes a lot hours to put these things together. You know I’ve probably did like a whole day of audio editing and then a whole day of video editing. It’s definitely an adaptation process, but it’s what all of us musicians have to do in order to survive right now,” quips La Riviere.

The band members are all in love with the experience as well.

Their ages and experience levels range, but all have been brought together by La Riviere’ creative video collage.

“It’s like exciting for us to see how it comes together because we don’t actually get to see what the rest of our bandmates are doing while they’re recording it,” says Amanda Nielsen, one of the singers from the group Soul Source, said during a Zoom meeting.

Bob Nelson, a singer in the jazz band Jive, is also grateful for La Riviere’s efforts.

“You know it’s extra work for him … but it was really great [for La Riviere] to be able to do that and then just do my own vocal over top of that which was really a blessing,” adds the singer.

” To be locked up in your house with a musical instrument and have an outlet like this is just, you couldn’t ask for a better sort of path through this very weird time,” chimes Soul Search drummer Chris Thackray. 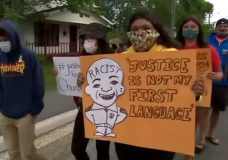 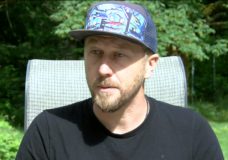