WATCH: In what could potentially be an upcoming BCHL playoff match-up, the Victoria Grizzlies were unable to contain the high-powered offence of the host Powell River Kings, falling 8-3 on Sunday afternoon.

The Grizzlies, fresh off another potential playoff defeat at the hands of the Alberni Valley Bulldogs, made the trip up to Powell River on little to no rest from the game the previous night, and an early 4-0 deficit reflected Victoria’s fatigue early on.

The Grizzlies would, however, make a game out of it in the middle frame, but the Kings pulled away in the third, sealing the deal.

With the win, the Kings remain within striking distance of the Grizzlies’ Island Division lead. The Grizzlies lead the Kings by four points with two games remaining, but the Kings have an extra game in hand, with the tie-breaker. The BCHL regular season wraps up on February 24th. 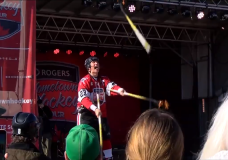