Flooding damage near Nanaimo and in the Cowichan Valley assessed

February 3, 2020 updated
CHEK
WatchDamage to Russell Farms near Crofton means it will take months to reopen

Cedar resident Ron Fawcett is trying to get his yard backyard after it was covered in water from Friday’s rainstorm. While he’s seen flooding at the home before, this was different.

“It has never come up that fast before so I knew it was going to be bad and about three hours later we had three feet of water around the house. We lost everything in the basement,” said Fawcett.

A line of dirt shows the water nearly reached the main floor and dealing with the mess today was near impossible.

“[The] hot water tank lifted up. Broke the water lines. Now we’ve got no water. We’ve got to take the motors off the furnace. We’ve got no heat and on top of that, we’ve got no electricity so I can’t even pump out my basement. Neither can my neighbours,” said Fawcett.

His wife was among 21 people near the Nanaimo River firefighters brought to safety yesterday.

The Nanaimo Regional District says its inspectors will check Monday if the area is safe before BC Hydro will restore power.

In the Cowichan Valley, a team from the Halalt first nation was assessing the 17 reserve homes evacuated to determine if they are safe to return to.

“This is all redone so I guess this will have to be redone again,” said France Bournazel, one of Russell Farm’s co-owners.

Here too the water came up extremely fast as seen in a time-lapse surveillance video.

The owner rushed in waist-high water to help get her night employee out, who ended up fleeing without one shoe.

A friend who started a gofundme says a number of losses won’t be covered by insurance.

“I believe their deductible is $10,000. Now how that plays in when it comes to insurance we’re not sure,” said Alexis Puttick, a friend.

“That’s overwhelming. I kind of need it and I’m one of those people. I don’t like to ask for money. I like to do it on my own. I’m proud but yes it’s helping,” said Bournazel.

46 people worked at Russell Farms last year but a reopening will take months, something the owner is vowing to do.

Saturday morning people evacuated dozens of homes after flooding in low lying areas near rivers on the east side of Vancouver Island. 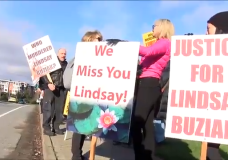