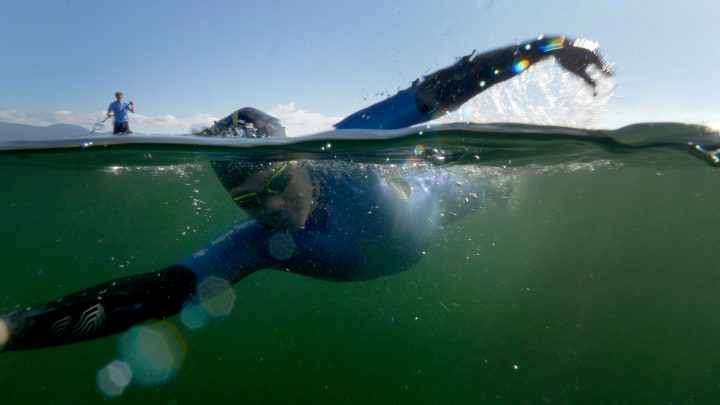 Jill Yoneda as she made her way across the strait. (Credit: SeaproofTV)

One-long swim and $11,000 later Jill Yoneda has completed the first ever double crossing swim of the Strait of Georgia — all for charity.

The swim started Friday at Neck Point in Nanaimo, and after making her way to Sechelt on the mainland and back across the strait she completed her almost 80 Kilometre swim in 25 Hours.

“It’s still so surreal,” said Yoneda. “When I hit land and walked out it just felt so good.”

The swim was to raise money for Canuck Place, an organization that provides pediatric palliative care to children and families in BC. The original goal was to raise $5,000 but she ended up getting more than double.

Yoneda and her support crew planned to return to Neck Point Saturday to finish the continuous swim, but on the way to the mainland late Friday night their plans started to change.

“We got this crazy cross current that kind of came out of nowhere and for six hours we just battled this current and didn’t move anywhere,” she said.

“We didn’t anticipate that at all…  we were able to get past it and when we turned around in Sechelt and came back the current was going in the opposite direction… and it blew me off course a bit,”

Yoneda and her crew, including the medical team, had to make a difficult call to change her exit point from Neck Point in Nanaimo to Lasqedi island.

She crossed the Georgia Strait, Malispina Strait and Sabine Channel and got on to Lasqedi on Friday just after 6 p.m.

A 64-foot support boat, a smaller skiff, a kayaker and a paddleboarder joined Yoneda as she made the journey. Every 45-minutes she would stop and tread water while she had food and water.

As she neared the small Island, Yoneda said it was the charity that kept her going.

“An hour before the swim ended I just hit this block, I just couldn’t muster one more ounce of energy to get through that last part… it all came down to thinking about the kids and the families of Canuck place and what they must go through and that gave me that last bit of energy… it was the toughest hour of my life,” she said.

“My crew they were so amazing… we ended up in this beautiful cove full of harbour seals and fish… it was the perfect landing spot… it was so momentous for all of us we were all crying.”

“It was a huge success for the fundraising effort,” said Krack who was in charge of logistics. “it was a long time for the crew to be out there too and they all did such an amazing job… everyone worked well together and overcame any obstacles that may have fallen in her way.

Yoneda was born and raised in Victoria, and grew up training with swim clubs becoming a competitive swimmer at a young age.

You can watch Yoneda’s landfall here. And can donate to Canuck place here. 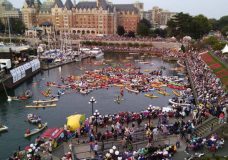 How to watch the 29th Annual Victoria Symphony Splash 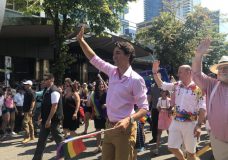