“That’s probably why it feels a lot of uneasiness for people that come here because there are souls probably here that didn’t have a proper closure,” said Chief Watts.

He says the same ground-penetrating radar done at the Kamloops Residential school on Tk’emlúps te Secwépemc territory where 215 children’s bodies were found will also need to be done in Port Alberni.

“We’ve heard awful stories about kids that didn’t make it home,” said Chief Watts, holding back tears. “Some of those kids, we don’t know where those kids are.”

READ MORE: A brief history of Vancouver Island’s five residential schools, and the children who died there

There are calls across the country to bring those kids, home.

LaFortune is an Indigenous carver. His mother was forced to attend residential school, so when he heard that 215 children’s bodies were found in Kamloops, he faced grief and rage, then, he took action.

“She went through hell in there, so this is where we can do something and do it properly,” said LaFortune.

LaFortune, Michele Mundy, and Steve Sxwithul’txw, a residential school survivor, decided to start a GoFundMe, to raise money to buy or rent the ground-penetrating radar which First Nations need to search for additional remains.

“The federal government scratches the surface and then say they’re done. I don’t want that. I want this done the proper way, and with the proper protocols from band to band,” said LaFortune, wanting to honour the different customs each band may have.

“This is so impactful, through the tears and the gasp when I looked at the numbers,” said Sxwithul’txw.

The group was spurred to action in reaction to years of government reaction.

In 2019 the federal government set aside more than $30 million to respond to the Truth and Reconciliation Commission’s Calls to Action, specifically related to missing children and burial grounds.

“We will be there for these communities,” said Carolyn Bennett, Crown-Indigenous Relations Minister.

Starting today, Ottawa says communities can apply for the funds.

“The communities have to be front and center. We have to make spaces for indigenous voices,” said Marc Miller, Indigenous Services Minister.

Meanwhile, the UN human rights office is calling on the Canadian government to conduct an exhaustive investigation to find Indigenous children who died at residential schools.

But for these survivors, are no longer waiting.

“Our children are out there. And we need to do something in this lifetime to bring them home,” said Sxwithul’txw. 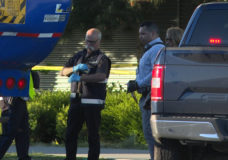 Fight led to death of pedestrian in Saanich, police say in appeal to witnesses