Fight led to death of pedestrian in Saanich, police say in appeal to witnesses

Posted: Jun. 2, 2021 5:35PM | Last Updated: Jun. 3, 2021 4:52PM
CHEK
WatchSaanich police say the death of a man who was struck and killed by a vehicle was the outcome of a physical altercation that happened just moments before.

Police say a collision that killed a pedestrian in Saanich on Tuesday was preceded by a fight between him and another person in the moments before the crash.

The man was struck and killed by a commercial truck in the 3400-block of Douglas Street, near Uptown mall, at 3:50 p.m. Tuesday.

On Wednesday, investigators said that a fight broke out between the victim and another individual that led to the 34-year-old’s death.

“Officers continued and learned that an altercation had taken place between two individuals at the bus stop at the corner of that intersection,” said Const. Markus Anastasiades of Saanich police, referring to the Douglas Street and Saanich Road intersection.

One man was arrested at the scene and taken into police custody.

The driver of the truck is not being investigated and is cooperating with authorities, police said.

“It’s tragic that someone’s lost their life in a very public way with several people involved,” said Anastasiades. “It’s very traumatic for not only the officers attending, for the first responders attending, but also the public that witnessed the event that happened very quickly and suddenly and resulted in a traumatic ending.”

Vancouver Island Integrated Major Crime Unit (VIIMCU) is now investigating the death and appealing to any witnesses who they haven’t already spoken to.

“[It’s] a very busy intersection here in Saanich,” Anastasiades said. “There were multiple witnesses that our officers were trying to gather and [receive] statements from and that continued on last night and into this morning. So it’s a very complex investigation that way.” 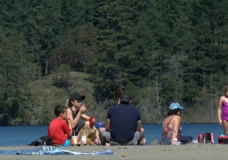 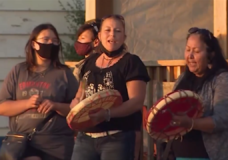